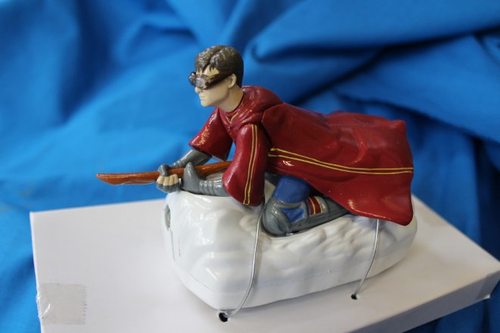 Two rare and previously unknown Harry Potter figures will have toy collectors flocking to Hansons Auctioneers this month.
Corgi produced just nine of the prototype Harry Potter figures, which feature the boy wizard on a motorised cloud. A wand-shaped radio control unit is included for guiding Harry around.

The toy manufacturer also made an identical number of prototype models of Harry’s foe Draco Malfoy.

UK-based Hansons is offering three pairs of the figures for sale at its Toys & Railwayana, Post Cards, Cigarette Cards & Collectables auction on October 27.

Each pair, presented in plain white Corgi packaging, is valued at £300-400 ($460-613). That’s indicative of their scarce nature – described by Hansons’ Kevin Bucknall as "rare as hen’s teeth" – and the growing popularity of "Potteriana".

The items all have nice authenticity. A former Corgi development manager has consigned them to the auction.

The most important pieces of Harry Potter memorabilia historically sell for large sums – such is the global appeal of the books and films.

At JustCollecting, we’re anticipating the Potter market to grow further, as those who grew up with the franchise enter the world of work and have more money to spend on the interests of their youth.

Check back on JustCollecting later in the month to see how the pieces fare.