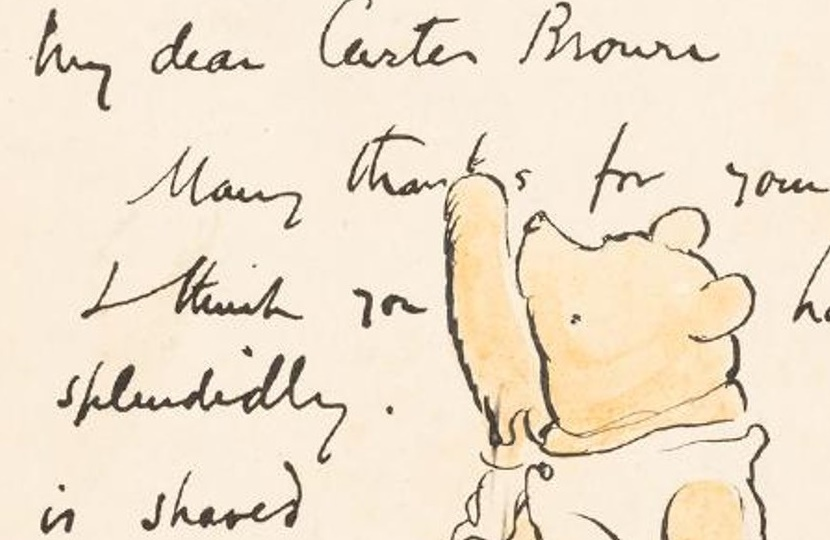 A rare drawing of the classic children’s character Winnie the Pooh will lead a sale of rare books at PBA Galleries this week.
The previously unpublished artwork by much-loved illustrator E.H Shepard is expected to fetch $40,000 – $60,000 when it goes under the hammer in San Francisco on April 19.

The watercolour and ink artwork appears in a letter from Shepard to his agent Carter Brown, dated February 29, 1932. In it, he writes:

"My dear Carter Brown, Many Thanks for your letter. I think you have done splendidly. This view is shared by others (as you see) coloured. Yours very sincerely, Ernest H. Shepard."

Author A.A Milne originally chose Shepard to illustrate his 1924 poetry book When We Were Very Young, and was so impressed by his work that in 1926 he tasked him with bringing the world of Winnie the Pooh to life.

Milne based his drawings on a stuffed bear owned by his own son, rather than the original Pooh that had belonged to Milne’s son Christopher Robin.

The success of Milne’s books, and his own illustrations, brought Shepard international fame, and in 1969 the V&A Museum even held an exhibition featuring 300 of his preliminary sketches.

Milne understood the importance of Shepard’s contribution to his books, and later arranged for the artist to receive a fair share of his royalties.

Back in December 2014, one of Shepard’s most famous illustrations achieved a world record price when it crossed the block at Sotheby’s in London.

Entitled ‘For a long time they looked at the river beneath them…’, the drawing depicted Pooh, Piglet and Christopher Robin playing Poohsticks on a bridge, from Milne’s 1928 book The House at Pooh Corner.

The illustrated letter on offer at PBA Galleries is considered especially rare, as Shepard rarely drew the characters unless he was specifically illustrating Milne’s books.