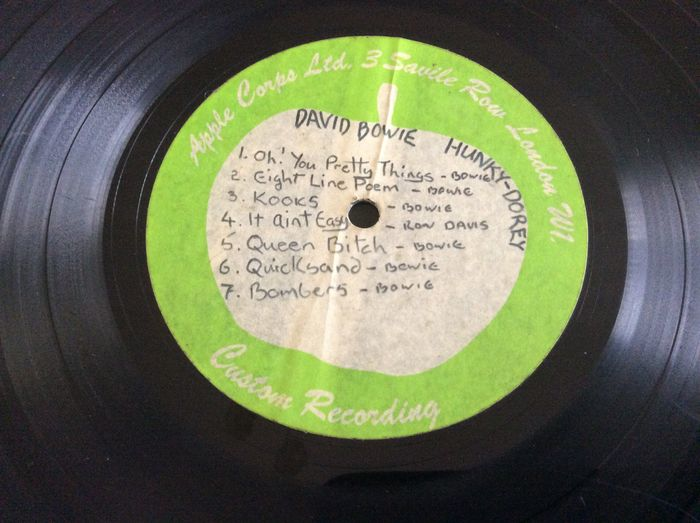 A highly rare copy of David Bowie’s classic album Hunky Dory could sell for almost £50,000 ($73,000) in an online auction this month.
The acetate copy of the 1971 album is completely unique, and features a track listing written in Bowie’s own handwriting on the label.

The recording features seven songs: Oh You Pretty Things, Eight Line Poem, Kooks, It Aint Easy, Queen Bitch, Quicksand and Bombers. These songs were recorded by Bowie and his backing band at Trident Studios in Soho, and the acetate was pressed directly from the original studio master tape.

The unique acetate was then used to press around 500 copies of the demo, which featured Bowie’s tracks on one side and songs by singer Dana Gillespie on the other. The album was then sent out by the pair’s manager Tony Defries, in an attempt to get them both record deals, which resulted in Bowie being signed to RCA and releasing a remastered version of Hunk Dory later that year.

Today these rare ‘Bowpromo’ albums are amongst the most sought-after for rare record collectors and David Bowie fans. However, even rarer is this original acetate from which they were pressed.

The original owner of the record was Mick Ronson, Bowie’s legendary guitarist and musical collaborator during the early years of his career. Following the pressing of the Bowpromo, Ronson took the recording home as a gift for his mother Minnie, and it later passed to her neighbour and then the consignor, who bought it from his friend in 1973.

Having remained unplayed for more than 40 years, the acetate – which is more fragile than a vinyl record – is being offered for sale on the online auction site Catawiki.

David Bowie was known to collect his own memorabilia, and maintained a huge archive of his own recordings, instruments and costumes, meaning items from his remarkable career rarely appear for sale.

Bidding in the Catawiki sale ends on April 30.