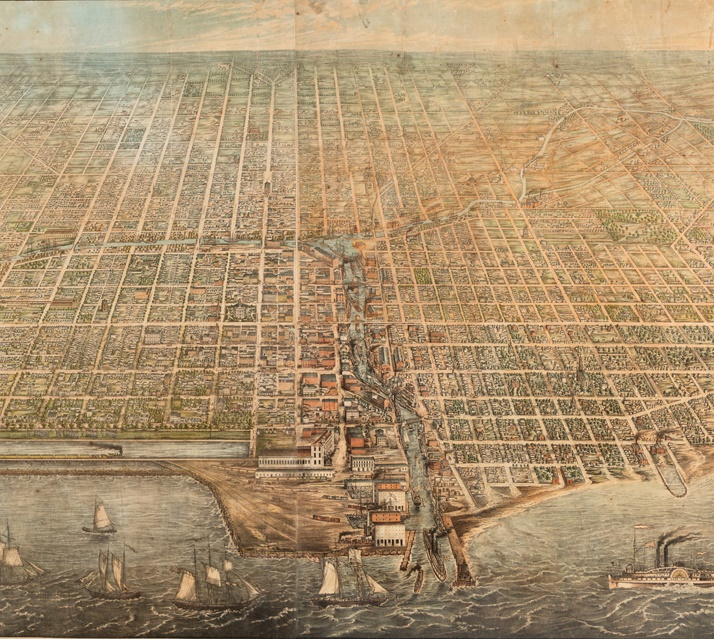 A remarkably rare map of Chicago as it stood before the Great Fire of 1871 is heading for sale next week.
The hand-colored map by J.T. Palmatary was printed in 1857, and is one of only four surviving copies.

Three others are known to exist at the Library of Congress, the Newberry Library and the Chicago History Museum.

The sale at Leslie Hindman Auctioneers marks the first time in over a century that a copy of the important map has appeared on the auction block.

The Great Chicago Fire burned for three days in October 1871, incinerating more than three square miles at the heart of the city and killing up to 300 people.

The cause of the fire remains a mystery to this day, with various theories blaming Mrs O’Leary’s cow, a milk thief named Pegleg Sullivan, and even a passing meteor shower.

Regardless of what sparked the blaze, it was the city’s lax fire codes which allowed it to spread rapidly throughout the city.

Wooden building with tar-covered roofs quickly caught alight, and when the city’s waterworks burned to the ground the mains supply was cut off – leaving ill-equipped fire fighters unable to offer any resistance.

Around 100,000 inhabitants lost their homes, and approximately 17,500 buildings were destroyed, permanently altering the layout of the city.

Many of the displaced inhabitants found themselves seeking refuge in an area called ‘The Sands’, which is clearly marked on the map in the lower right-hand corner.

The Sands was a notorious neighbourhood on the shore of Lake Michigan, rife with brothels, gambling dens and saloons, which later became one of the most sought-after pieces of real estate in the city known as Streeterville.

Another notable feature is the Illinois Central Railroad, which appears in the foreground of the map. Completed in 1856, it was the longest railroad in the world, running 705 miles to Chicago from Cairo, Illinois.

The map is expected to sell for up to $30,000 during the sale of Fine Books and Manuscripts on September 13.