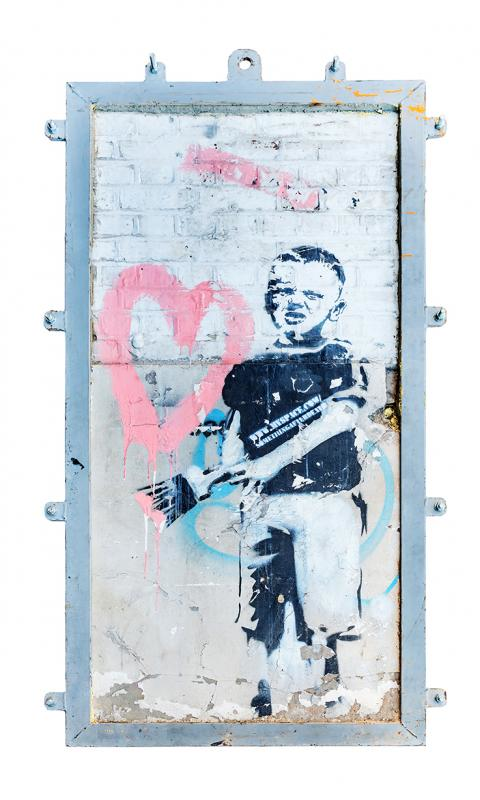 A collection of rare works by street artist Banksy have sold as part of a Street Art sale at Julien’s Auctions.
The sale, which also offered work by the likes of Shepard Fairey, RETNA, Damien Hirst, Alec Monopoly, Ben Eine, D*Face, Faile,&nbsp; Kaws, Nick Walker, Hush and Paul Insect amongst others, realized a total of $1.3 million.

Amongst the standout lots was ‘Heart Boy’, a mural originally created by Banksy in London in 2009. Having stalked the street for weeks with fellow graffiti artists, the Brooklyn-based collective Faile, Banksy found the perfect spot on the side of a building in Islington, near King’s Cross Station.

The building was demolished just a few months later, but the mural was removed and preserved by the owner, before selling at Julien’s seven years later for $125,000.

Another notable lot was ‘Happy Choppers’, an early Banksy work featuring an image of attack helicopters dressed with pink hair bows. Originally painted on a construction site board at Whitecross Street market in Central London, the 2002 work achieved a price of $140,800.

The work ‘Crazy Horse Car Door’ was created in 2013, as part of Banksy’s unofficial New York residency ‘Better Out Than In’. The full installation, entitled ‘Crazy Horse 18’, was originally created in the Lower East Side and featured two vehicles painted with charging horses wearing night vision goggles.

The installation was accompanied by the sounds of a military audio clip, in which U.S helicopter pilots could be heard joking over the sound of gunfire about the killing of civilian men, women, and children in Iraq.

Removed from one of the vehicles, the car door sold along with a painted traffic cone from the installation for a price of $87,500. 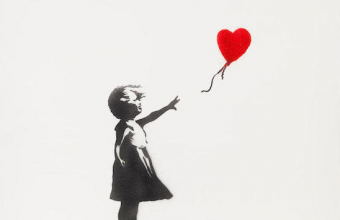