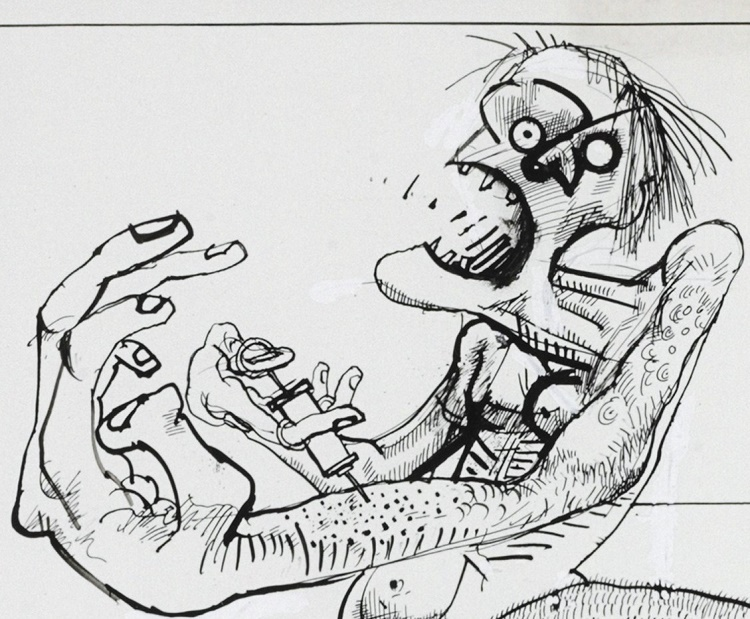 An original Ralph Steadman artwork from Hunter Thompson’s classic Fear and Loathing in Las Vegas is up for sale at Christie’s.
The sale marks the first time one of Steadman’s famous illustrations from the book has ever appeared at public auction.

The pair first met in 1970, when Steadman was assigned to work with Thompson on a Scanlan’s Monthly article titled ‘The Kentucky Derby Is Decadent and Depraved’.

The pair then shared a remarkable friendship and a unique creative partnership for 35 years, collaborating on several books and articles, until Thompson shot himself in 2005.

"What a person to meet on your first trip to America,’ Steadman later told Wonderland magazine. "It was like hitting a bullseye first time… Hunter and I got on instantly because we were so different. If we’d both been tough guys it wouldn’t have worked.

"He could be mean. But it was a meanness we both understood. Hunter triggered something. Suddenly I knew I could draw with a reckless point of view."

None of Steadman’s artworks could be considered more reckless than those he created for Fear and Loathing, Thompson’s own journey into the savage heart of the American Dream, accompanied by a suitcase full of drugs and his unpredictable attorney.

The illustration offered at Christie’s depicts a terrible vision Thompson had whilst visiting a convention of drug enforcement officers in Las Vegas.
His accompanying text reads:

"The sight of a 344-pound police chief from Waco, Texas, necking openly with his 290-pound wife when the lights were turned off for a Dope Film was just barely tolerable.

"With a head full of acid, the sight of two fantastically obese human beings far gone in a public grope while a thousand cops all around them watched a movie about ‘the dangers of marijuana’ would not be emotionally acceptable. The brain would reject it."

The artwork first appeared on the cover of Rolling Stone magazine, which published Thompson’s story ‘Fear and Loathing in Las Vegas: A Savage Journey to the Heart of the American Dream’ in two parts in 1971.

Following the publication of the story, Steadman sold all of the original artworks to Rolling Stone founder Jann Wenner for just $75, on the advice of his agent.

The story, along with Steadman’s illustrations, was then published as a book the following year, and today is regarded as a classic work of 20th century American literature.

Steadman later hugely regretted his decision to sell, and for the rest of his career has kept almost every piece of original artwork he ever created.

He even went as far to say "If anyone owns a Steadman original, it’s stolen" – although the work currently for sale at Christie’s does come with a certificate of authenticity signed by Steadman himself.

Original Ralph Steadman artworks are remarkably rare, and the appearance of a piece from his most famous series is completely unheard of.