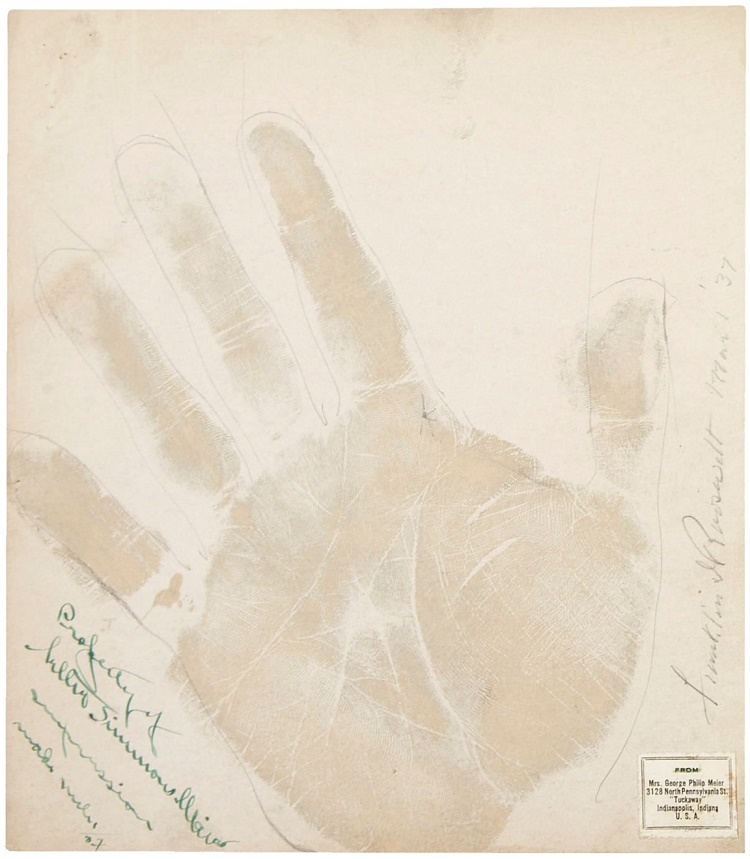 A palm reading secretly given to President Franklin D. Roosevelt could fetch up to $20,000 at Heritage Auctions next week.
The signed palm prints of both FDR and First Lady Eleanor Roosevelt are amongst the more unusual lots in Heritage Auctions’ political memorabilia sale in Dallas on December 2.

In 1937 the renowned palm reader Nellie Simmons Meier made an unofficial visit to the White House, at the invitation of the First Lady.

Having given Eleanor a detailed reading, Meier was then unexpectedly offered the chance to inspect the President’s palms.

The reading she gave him was highly detailed, and states, in part:

"Rarely have I looked at hands in which the markings showed such a wide range of ideas, such great vitality and such ease of accomplishment along so many avenues of physical and mental activity.

"…he uses those characteristics with which he is so richly endowed, his record of achievement for the betterment of his country and his people will place him among the great patriots and statesmen of our land."

That same year Meier published her own book, entitled ‘Lions’ Paws, the Story of Famous Hands’, which featured palm prints and character studies of her most famous clients.

These included the likes of Walt Disney, Amelia Earhart and Susan B. Anthony – but the Roosevelts’ readings remained a secret.

During a series of letters from the Eleanor to Meier, it was decided that her reading were far too personal in nature to be published whilst FDR was still President.

"The President’s secretaries are very much disturbed because they do not think it would be advisable while the President is still in the White House, for your material to appear either in your book or in the file of the Library of Congress," she wrote in October 1937.

Today Meier’s archive of notable palm prints is indeed held in the collection of the Library of Congress – but this collection, from perhaps the most significant reading of her career, remains in strictly private hands.