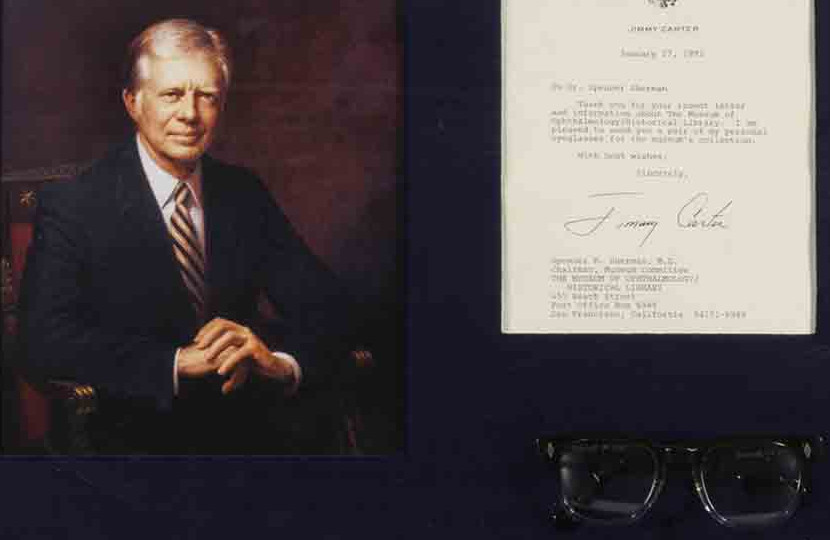 A collection of nine presidential eyeglasses has sold for $31,250 at Nate D Sanders.
All were acquired by Dr Spencer Sherman, a scholar in ocular science and proprietor of the Museum of Ophthalmology in San Francisco.

The earliest name in the set belonged to 33rd president Harry S Truman, whose round eyeglasses were a key part of his attire. Truman began wearing spectacles following a bout of diphtheria as a child.

A pair Richard Nixon wore on a 1985 trip round the world (a decade after leaving office) are accompanied by a note from the president claiming: “They are perhaps the best-traveled glasses in your collection!”

The most recent example belonged to George HW Bush and are extremely well used, with a series of bite marks on ends. A letter from Bush explains: ”…Whether at the White House or across the globe, I used these glasses while preparing speeches, reviewing briefings, and writing letters to constituents and world leaders.

“I also wore these glasses while reading mysteries, biographies, and other good books. I liked to begin each day by reading the Bible, and these glasses were a crucial part of that daily ritual…”

Another highlight of the April 26 auction was an exceptional signed photograph of Marilyn Monroe that realised $27,684, more than double the $12,500 opening bid.

The inscription on the front reads: “To Dru, It’s wonderful to work with you again / Marilyn Monroe”.

“Dru” is Drusilla Davis, a backup dancer who appears alongside Marilyn during the iconic Diamonds are a Girl’s Best Friend scene in Gentleman Prefer Blondes.

A note on the reverse indicates it was signed on March 6, 1953, the last day of filming for the movie.