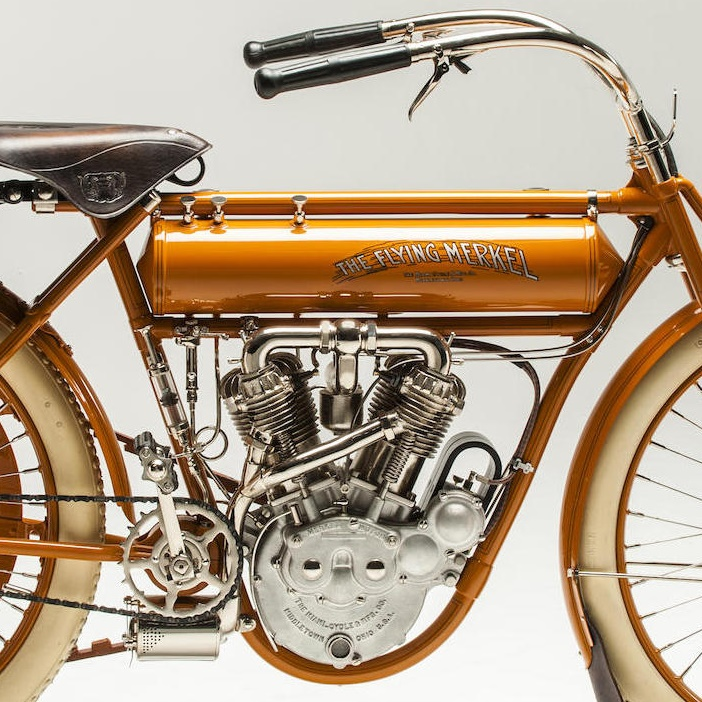 A series of rare and remarkable pre-war motorcycles will lead Bonhams’ seventh annual sale in Las Vegas later this month.
Amongst the most valuable lots is a 1936 Crocker ‘Hemi Head’, described as "the Holy Grail of American motorcycles" and expected to sell for $500,000 – $600,000.

The legendary U.S manufacturer, founded by Albert Crocker in 1936, produced just 75 motorcycles during its short history, and today only seven are known to have survived.

The bike offered at Bonhams – #8 off the production line – is also the earliest example ever offered for public sale, and originates from the collection of the Wheels Through Time Museum in North Carolina.

The sale will also feature two iconic Flying Merkel motorcycles at opposite ends of the spectrum.

First is a highly rare and completely unrestored 1913 Flying Merkel Twin, regarded by experts as "one of the most sought after early machines in the world". Having survived for over a century with much of its original orange paint and factory decals intact, the timewarp machine comes with an estimate of $130,000-$150,000.

And for enthusiasts looking for a ready-to-ride version, there’s a stunningly-restored 1912 Flying Merkel Belt Drive V-Twin. Offered from a private Southern collection, and described simply as "perfection in a restoration", the motorcycle is estimated at $135,000-$150,000.

Another early highlight is a 1914 Feilbach Limited Twin, one of just a handful known to exist. As the last example ever built, the motorcycle was owned by company founder Arthur Feilbach and remained in family until the 1980s.

It was later carefully restored, using a set of original factory blueprints discovered in an antiques store, and not comes with an estimate of $150,000-$200,000.

The Bonhams Las Vegas Motorcycle Sale takes place at the Rio Hotel and Casino on January 26.