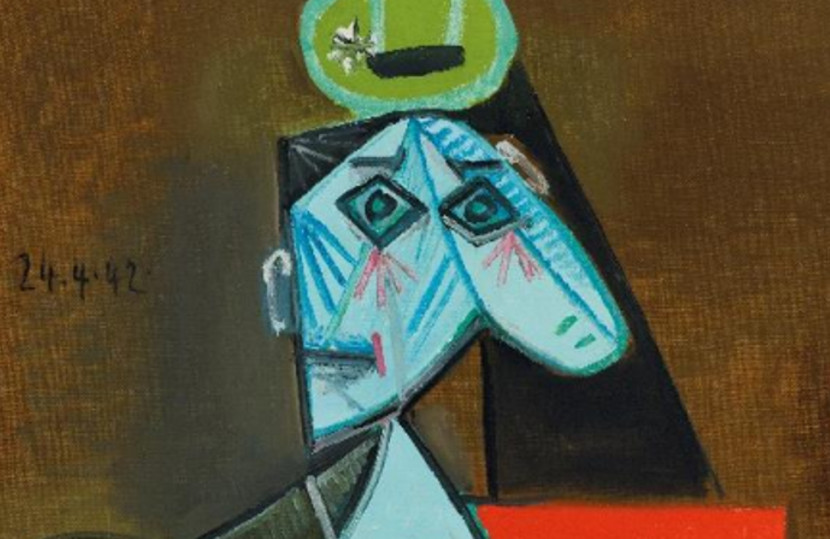 Pablo Picasso’s Femme dans un fauteuil (1942), a portrait of his muse Dora Maar, will cross the block at Christie’s London on June 20.

The present lot has only been exhibited on a handful of occasions. After Picasso’s death it passed to his last wife, Jacqueline Picasso. It was only sold after she died in 1986.

That the family kept this piece for so long is testament to its quality. The rich colours are emblematic of Picasso’s work from this period – during the height of the German occupation of France.

Picasso holed up in his studio in Paris. He was constantly hassled by the Gestapo, who came round and smashed up paintings on a whim. He was top of the list of the Nazi list of degenerate artists but was never arrested by the Germans. Legend has it that Arno Breker, Hitler’s favourite sculptor, spoke privately with the dictator in his defence.

Picasso met Dora Maar in 1935. At the time he was estranged from his first wife and living with Marie Therese Walter, another of his muses. While Picasso depicted Walter as full of light and life, Maar is the polar opposite. She usually wears dark colours and is usually shown looking serious and sad – sometimes in tears.

Jussi Pylkkänen, Christie’s global president, says: “Dora Maar is without question Picasso’s most recognisable muse who inspired him throughout the war years in Europe. She remained a beacon of hope, beauty and compassion during this difficult period.

“We are honoured to have the opportunity to sell such a major work by Picasso, the Mozart of the 20th Century, which has rarely been seen in public since its acquisition from the family many years after the artist’s death. It is a complex and striking portrait of Dora at her beautiful and noble best.”