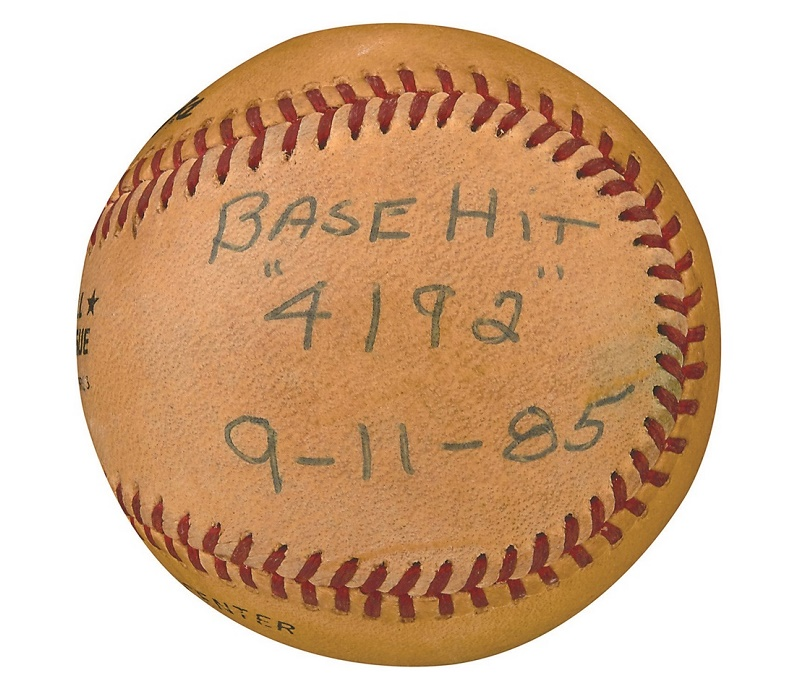 The baseball with which Pete Rose broke the all-time hits record has sold for more than $400,000
Bearing Rose’s handwritten inscription, the ball hit the auction block for the first time in its history at Lelands, realizing a final price of $403,657.

On September 11, 1985, during a game against the San Diego Padres, Rose struck the ball from pitcher Eric Show to earn his 4,192nd career hit, breaking Ty Cobb’s record which had stood for more than half a century.

The transaction made headlines around the world, as the first sale of sports memorabilia to fetch a six-figure sum, and according to experts helped turn the ‘hobby’ into a multi-million dollar industry.

Despite boasting some of the most impressive stats in baseball history, Pete Rose remains one of the game’s most divisive players.

During his 23-year playing career with the Cincinnati Reds, Philadelphia Phillies and the Montreal Expos, Rose achieved MLB records for hits, games played, at-bats, singles, and outs – all of which are yet to be broken more than 30 years later.

However, during his time as manager of the Cincinnati Reds Rose was accused of betting on baseball games he was involved in, and in 1989 was placed on baseball’s ineligible list.

The scandal has shrouded his career ever since, and along with Shoeless Joe Jackson, Rose remains perhaps the most notable player never inducted into the Baseball Hall of Fame for his transgressions.