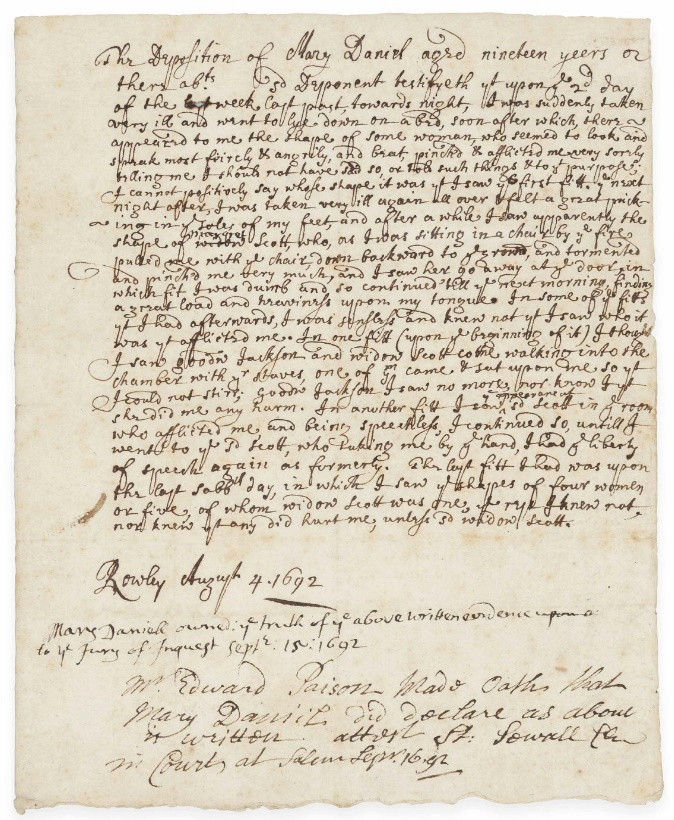 A rare original manuscript used during the infamous Salem witch trials has sold for more than $100,000 in New York.
The handwritten document remains one of the few surviving piece of evidence from the trial, and sold for $137,500 as part of a rare book auction at Christie’s.

The trials, which took place in the town of Salem, Massachusetts in 1692, resulted in the executions of 14 women and five men accused of witchcraft, along with the deaths of several others in custody.

The manuscript was used as evidence in court, and featured the deposition of Mary Daniel, who testified against Margaret Scott and helped send her to the gallows.

Margaret Scott was an elderly widow from the nearby town of Rowley, who had been left destitute following the death of her husband in 1671.

She had previously lost four of her seven children during childhood, and her lowly stature had made her unpopular with her neighbours.

Scott was accused of witchcraft by two of the town’s most notable families, the Wicoms and the Nelsons, and a member of the Nelson family was also part of the grand jury that eventually convicted her.

Daniel, believed to have been a local servant, claimed she had been visited by the spectral appearance of Scott several times in the middle of the night
Her testimony reads in part:

"There appeared to me the shape of some woman, who seemed to look and speak most fiercely and angrily, and beat, pinch’d and afflicted me very sorely… In some of ye fits yt I had afterwards, I was senseless and knew not yt I saw who it was yt afflicted me."

"I was taken very ill again all over & felt a great pricking in ye soles of my feet, and after a while I saw apparently the shape of Margret Scott, who, as I was sitting in a chair by ye fire pulled me with ye chair, down backward to ye ground, and tormented and pinched me very much, and I saw her go away at ye door, in which fit I was dumb and so continued till ye next morning, finding a great load and heaviness upon my tongue…"

Scott was brought to trial on September 17, and just six days later she had been found guilty of witchcraft and executed for her supposed crimes upon Gallows Hill.

Today the city of Salem has plans to create a memorial at the site, as a permanent tribute to one of the darkest chapters of religious fervour and mass hysteria in American history.