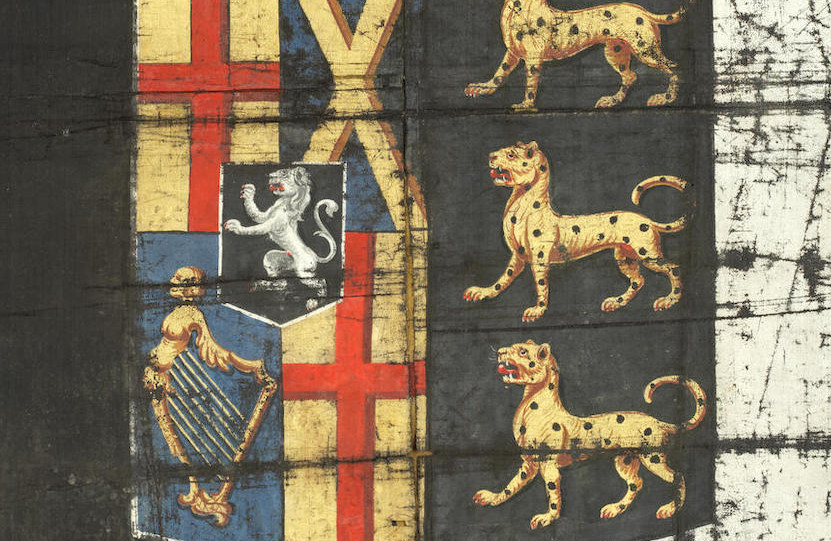 Oliver Cromwell was buried at Westminster Abbey in 1658 (Image: Bonhams)

Bonhams is offering a silk escutcheon – or funeral standard – flown from Oliver Cromwell’s hearse during his funeral in 1658.

Cromwell, Lord Protector of the Commonwealth, died in September 1658. Most historians believe he succumbed to a malarial infection.

The funeral was held on November 23, 1658. However, he was actually buried in secret two weeks earlier for a fairly unpleasant reason that we won’t delve into here (let’s just say decay set in early).

The diarist Thomas Burton, who attended the chambers where Cromwell lay in state for two months, wrote: “The first room where the spectators entered, was wholly hung and covered with black; and at the upper end of this room was placed a cloth and chair of state. In the like manner of the first room were two others… all having funeral escutcheons very thick upon the walls; and guards of partizans were placed in each room for people to pass through…

“Here lay the effigy of his Highness, with a large canopy of black velvet fringed, which hung over it. The effigy was of wax, fashioned like the Protector, and placed lying upon its back; it was apparelled in a rich and costly suit of velvet…”

Cromwell’s body was exhumed and his head stuck on a spike above Westminster Abbey once his old enemy Charles II returned to the throne in 1660.

This escutcheon is emblazoned with the arms of the Commonwealth, as well as Cromwell’s personal rampant lion symbol. This side of the flag is painted black, in memory of the deceased. On the right hand his wife Elizabeth’s three leopard arms. This side is painted white, to reflect the fact that Elizabeth outlived her husband.

In all 2,006 of these escutcheons were made for the funeral, of which only 530 were produced in silk. Another four silk specimens are known to have survived, with one at Westminster School, another at the Museum of London and the last at the Cromwell Museum in Huntingdon.