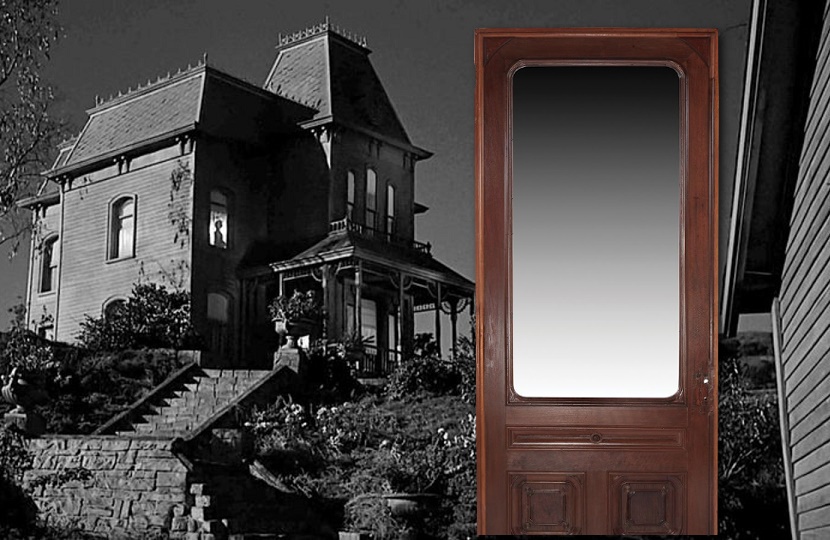 The front door to the infamous Norman Bates 'Psycho' house is expected to fetch up to $30,000 (Image: profiles in History)

A sale of Hollywood memorabilia in California next month will offer horror fans the chance to own a very special – and creepy – piece of movie history: Norman Bates’ front door.

The wooden door was the entrance to the iconic Bates Motel house, the setting for Alfred Hitchcock’s classic 1960 thriller Psycho in which guests checked in, but they never checked out.

The wooden door is described as “one of the most important Hitchcock relics one could ever hope to find”, and is expected to sell for $12,000 – $15,000 at the Profiles in History auction on December 11-12.

The imposing door, which measures 111″ x 46″, was installed in the studio set of the Bates’ home and used for shooting interior scenes with stars Anthony Perkins and Janet Leigh.

The original trailer for the 1960 film even featured director Alfred Hitchcock opening the door as he took audiences on a blackly comic tour of Norman Bates’ home, recounting the murders as if they had actually happened.

“In this house, the most dire, horrible events took place,” he says. “I think we can go inside because the place is up for sale, although I don’t know who’s going to buy it now.”

Today screen-used memorabilia from Hitchcock’s films is considered almost non-existent, as most props and costumes of the era were reused, altered and eventually destroyed by the studios.

The rarity of the surviving door therefore makes it an important piece on cinematic history. But what makes the story even more macabre is where it ended up next: as the entrance to the Dallmann-Kniewel Funeral Home in Rib Lake, Wisconsin.

The owner of the business reportedly purchased the door at auction, and installed it at the funeral home as it fit the period of the building.

Years later when the business closed down it was acquired by Dan Estep, a collector of antique architectural salvage, who researched the door and managed to prove its cinematic provenance.

It seems fitting that the door ended up in Wisconsin, as the state was home to the horrific events that partially inspired author Robert Bloch to write his original novel Psycho in 1959.

It was in the small town of Plainfield, around an hour from Rib Lake, where the notorious murderer and grave robber Ed Gein committed his crimes.

Between 1954 and 1957 Gein killed two women, and when police investigated his home in 1958 they discovered a collection of gruesome trophies, furniture and even clothing made from human body parts.

In an eerie parallel to the character of Norman Bates, Gein had lived with a domineering mother, and after her death he had attempted to make himself a human skin ‘suit’ from the bodies of women who resembled her.

Having survived intact for almost 60 years, and travelled from a Hollywood movie set to a Wisconsin funeral home, the Psycho door is now looking for a new home – and hopefully this time, it’s a little less sinister.