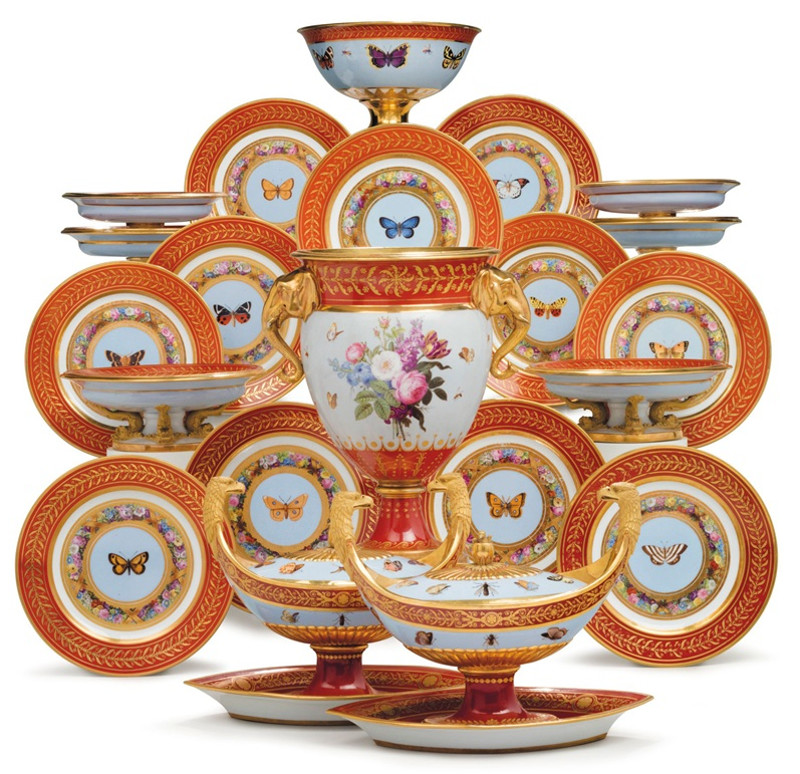 Part of Napoleon’s prized Sevres Marly Rouge dinner service is set to star in the sale of the Peggy and David Rockefeller collection at Christie’s in May.
It’s valued at between $150,000-200,000. However, as we’ve seen individual plates go for in excess of $15,000 in the past, that estimate looks on the conservative side.

No expense was spared on the 256 piece set, which is decorated with images of butterflies and flowers.

In fact, Napoleon was so enamoured of the service he insisted on bringing it with him on his first exile to the remote Italian island of Elba.

Following his escape and subsequent defeat at Waterloo in 1815, he was shipped off to the even more remote St Helena – sans dinner service.

In the years hence, it was split up and sold to collectors across the globe.

That was until Abby Aldrich Rockefeller, mother to David, embarked on a mission to bring the set back together. She collected 22 pieces in all that offer an excellent overview of the original service.

“It wouldn’t surprise me if David was particularly fond of this service.

“Not, as one might imagine, for the thrill of eating his ice cream from the same dish that Napoleon used, but because he loved the butterfly motifs.

“As an avid lover and collector of insects, you can see why the Marly Rouge service appealed to David perhaps as much as it had once appealed to Napoleon.”

In recent years demand for Napoleon memorabilia has skyrocketed, with one of his iconic tri-corn hats selling for $2.4m in 2014.