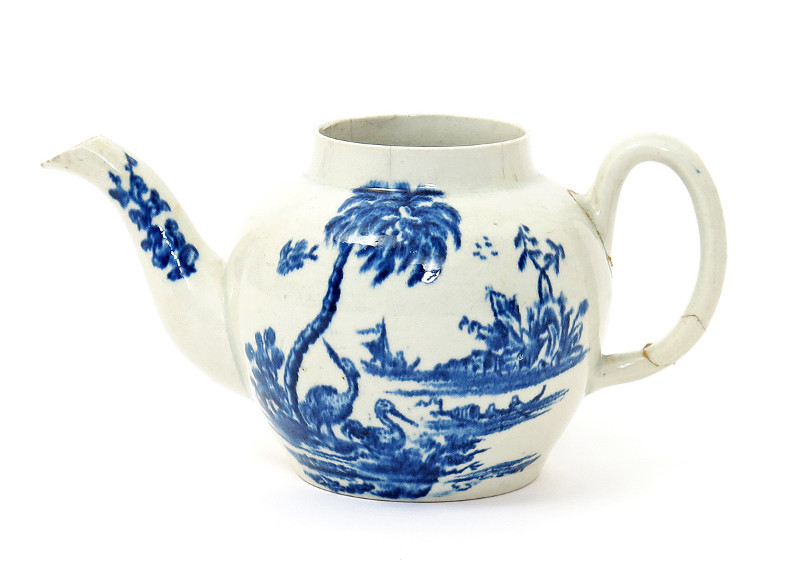 That sum is all the more incredible when you consider the consignor paid just £15 ($20) for it at an antiques fair in 2016. So what on earth is an 18th century American teapot doing in rural Wiltshire?

John Bartlam was only a recent transplant to America. He was born in Staffordshire, the heart of Britain’s porcelain industry. By the mid-1760s he seems to have got himself into some money troubles that were sticky enough to necessitate a new start on the other side of the Atlantic.

This is not the first John Bartlam to have been found in the UK. Four tea bowls have emerged in British collections since 2010. The most likely explanation is that Bartlam was selling to his contacts at home.

That link to the English porcelain industry is why the consignor managed to snag such a bargain. Up until very recently, this piece was miscategorised as originating from the London based Isleworth factory (active 1766-1787).

The mistake is understandable. Bartlam’s teapot uses a “Man on the Bridge” pattern that was also used at Isleworth, along with other quirks that give away the British origins of the maker.

Woolley & Wallis had valued the piece at around £10,000-20,000 ($14,000-28,000). Many of the bids that pushed it into the stratosphere came from US buyers, who kept the auction phone lines extremely busy. The winning bidder was dealer Rod Jellicoe, for New York’s Metropolitan Museum.

This is only the second piece of Bartlam porcelain to sell at auction. The first, one of the aforementioned tea bowls, sold for $146,500 at Christie’s New York in 2013.