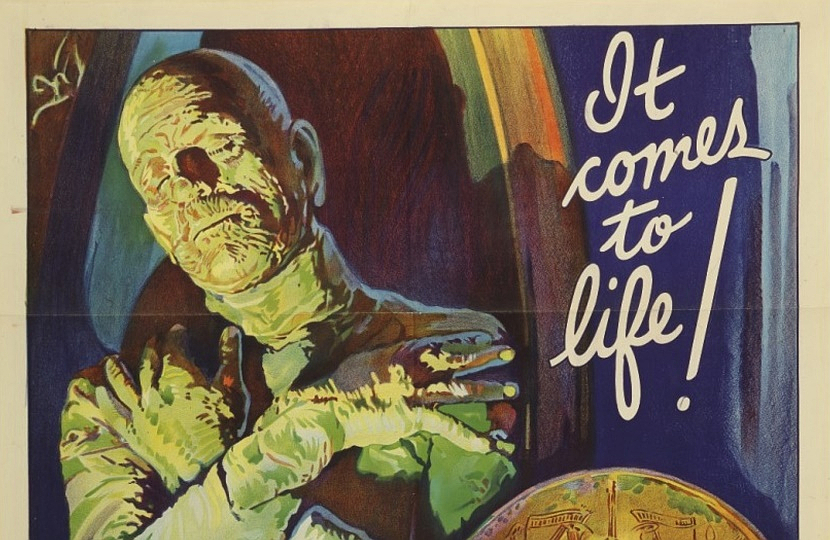 A highly rare poster for the classic horror movie The Mummy could fetch up to $1.5 million when it goes up for sale at Sotheby’s this month.

Depicting Boris Karloff in one of his most famous roles, the striking poster will be offered as the sole lot in a special online auction which concludes on October 31.

The poster is one of only three examples known to exist and is regarded by many as the ‘Holy Grail’ of vintage poster collecting.

The pre-sale estimate of $1 million – $1.5 million would see it smash the world record as the most valuable movie poster ever sold.

The Mummy poster was the work of Karoly Grosz, the renowned Advertising Art Director for Universal Studios who designed some of the finest movie posters of the 1930s.

“Notable for their bold colors, complex compositions and minimal use of white space and text, Universal’s horror posters from the period are among the most compelling and desirable examples of advertising art in the history of film,” said Sotheby’s.

“The Mummy is not only one of the rarest of these early posters, but also one of the most successful designs. The present example, stored folded for decades, is the only known impression that has never been backed and is extraordinarily well preserved.”

Back then it was believed that just two copies remained in existence, although now records show that another has since been discovered.

One of those examples is owned by the Kirk Hammet, lead guitarist with Metallica and one of the world’s most renowned collectors of vintage horror movie posters.

Horror and science fiction posters are by far the most sought-after and valuable in the entire hobby; in the current list of the 20 most valuable posters ever sold, 16 feature monsters, ghouls, murderers and sinister robots.

The current auction record for a single movie poster was set in November 2017 by another classic Universal monster, Dracula.

The style-A one-sheet poster for the 1931 film sold at Heritage Auctions in Dallas for $525,800, having spent more than 60 years in a single private collection.

If the Mummy poster achieves its estimate, it would even exceed the record for the most valuable movie poster ever sold in a private transaction.

That record has stood ever since 2005, when a poster for Fritz Lang’s silent science fiction masterpiece Metropolis sold at the Reel Poster gallery in London for $690,000.

Along with the potential of a new world record, the upcoming Sotheby’s sale may prove to be a watershed moment for the entire hobby.

In any area of collecting, the sale of the first $1 million item can boost the market considerably and bring it to the attention of a broader audience.

The market for rare comic books made a similar leap back in 2010, when a copy of Action Comics #1 featuring the debut of Superman sold for $1 million at ComicConnect.

Within the space of just five weeks that record was broken twice more in quick succession; first by a copy of Detective Comics #27 (the debut of Batman) which sold three days later for $1.07 million, and then by another Action Comics #1 which achieved $1.5 million.

Today the comic book record stands at $3.2 million, and values have increased across the board for rare titles from every era.

If the Mummy poster does become the world’s first million-dollar movie poster it could have a similar effect, invigorating the market for a wide variety of vintage posters.

Seven-figure sums could also be enough to tempt collectors to release further rarities from the vaults of long-term ownership – meaning there’s a fair chance that record won’t stand for long.