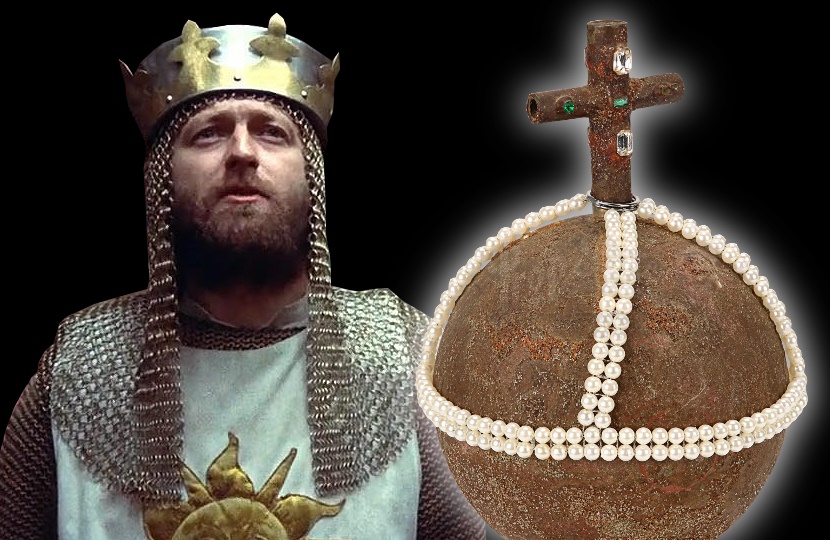 If you’re having problems with a killer bunny rabbit, an upcoming auction of movie memorabilia at the Prop Store may have the perfect thing for you, courtesy of Monty Python.

The iconic prop was believed lost by fans of the classic comedy film – but in fact it had spent the past 45 years with the family of the prop maker who originally made it.

In the film, King Arthur and his knights are led to a cave guarded by the Killer Rabbit of Caerbannog. Although seemingly harmless, the small rabbit quickly decapitates one of the men and sets about attacking the others – causing Arthur to bring in the heavy artillery.

The Holy Hand grenade is described as a “sacred relic” carried by Brother Maynard, and its instructions are read aloud by Michael Palin from the ‘Book of Armaments’:

“..And the Lord spake, saying, “First shalt thou take out the Holy Pin. Then, shalt thou count to three. No more. No less. Three shalt be the number thou shalt count, and the number of the counting shall be three. Four shalt thou not count, nor either count thou two, excepting that thou then proceed to three…

“Five is right out. Once the number three, being the third number, be reached, then, lobbest thou thy Holy Hand Grenade of Antioch towards thy foe, who, being naughty in my sight, shall snuff it.”

King Arthur, as played by Graham Chapman, then pulls the pin on the grenade and hurls it at the tiny rabbit, blowing it to smithereens and allowing the knights to continue on their quest.

Although the holy relic is missing much of its original gold paint, and some of the jewels are replacements, it remains as one of the few, highly rare surviving props from the 1975 film.

The film’s budget was famously so small that the team couldn’t afford to hire real horses, forcing Arthur and his knights to mime riding them with the aid of coconut sound effects.

The Holy Hand Grenade of Antioch was similarly constructed on the cheap, using a ballcock from a toilet cistern which was then hand-painted, bejewelled and finished with a holy metal cross for the pin.

The design is based on the Sovereign’s Orb, a priceless piece from the British Crown Jewels which has been used in official ceremonies since the coronation of Henry VIII in 1509.

The Prop Store sale will also include a helmet worn by one the of the French soldiers in the film, who taunt King Arthur and his men from a castle rooftop with insults including the immortal line:

“I fart in your general direction! Your mother was a hamster and your father smelt of elderberries!”

Monty Python and the Holy Grail is regarded as one of the funniest films ever made, and the comedy team’s influential legacy has lived for generations since they first appeared on TV in 1969.

For the worldwide army of Python fans, the Prop Store auction on September 31 – October 1 will offer a rare chance to own a very, very silly piece of movie history.