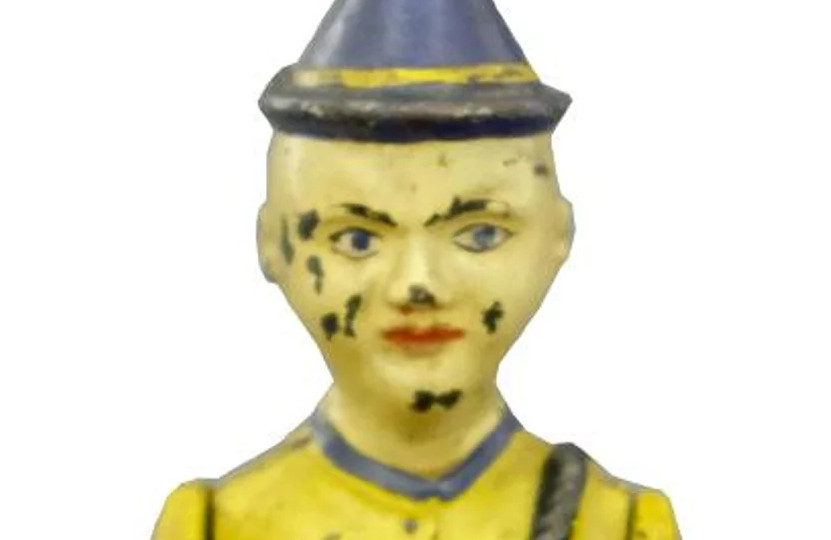 A Kyser & Rex Co. Mikado mechanical bank is set to star in a sale of two major collections at RSL Auctions on June 2.
The piece, valued at $120,000-160,000, dates to the late 1880s and is directly inspired by the classic Gilbert &amp; Sullivan operetta of the same name.

The Mikado was a sensation on its release in London in May 1885 and New York in the August. As illustrated here, merchandising is by no means a modern phenomenon. This bank was swiftly developed after release for an audience of newly minted Japanophiles.

RSL explains what happens when coins enter the slot: “As the bank is played with, the Mikado lifts up and lowers his arms in sequence. Children watch with baited breath, as coins move from beneath the left hat to beneath the right hat and ultimately, disappear altogether.”

This piece is among the great holy grails of mechanical bank collecting. An extremely rare blue variant sold for $198,000 at Morphy Auctions in 2012.

The design is by James Bowen, a man with a virtuosic feel for his chosen art, and features one of the most complex mechanisms in the hobby. It’s drawn from the Italian Commedia Dell’arte tradition and displays its three associated stock characters (harlequin, clown and concubine).

The action catapults the clown and harlequin forward and sets the concubine spinning rapidly. A particularly good one made $216,000 at RSL Auction in 2014.