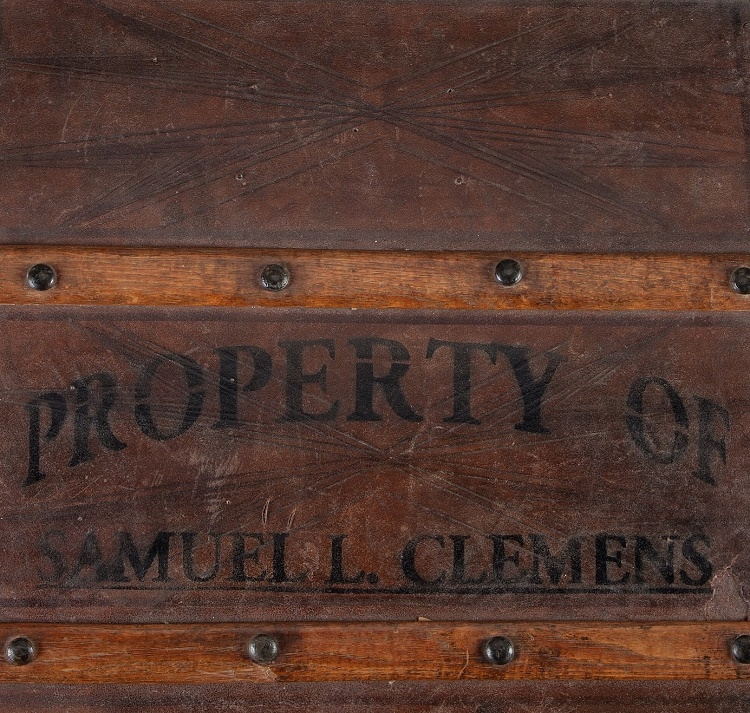 A stagecoach trunk once owned by the celebrated American writer Mark Twain will be offered for sale at Heritage Auctions next month.
The wooden, dome-top trunk bears the inscription "Property of Samuel L. Clemens" (Twain’s real name) painted on the lid, and was discovered in 2015 at a regional auction in Kansas City, Missouri by collector Don Bearden.

"Instinctually I knew it was his trunk—after all, his name is on it,” Bearden said, in an interview with Fine Books and Collections magazine.

"However, I wanted to go much deeper to discover the trunk’s origin of manufacture, history, and existence. I wanted to establish provenance. It’s the discovery of the unknown. It’s a rush. For a history buff it’s the Holy Grail experience."

Bearden set out on a quest to establish the trunk’s authenticity, which involved painstaking research, forensic testing and the help of renowned Mark Twain experts across the U.S.

Made by the J. Barwick Trunk Manufacturer company, and dated circa 1865, it’s believed Twain purchased the trunk whilst in St. Louis in 1867.

Twain travelled extensively throughout the 1860s working as a journalist – first across the U.S, and then further afield to Europe.

These journeys formed the basis of his first two full-length works: The Innocents Abroad, about his journey on the steamship Quaker City to Europe and the Holy Land, published in 1869, and Roughing It, about his travels in the American West, published in 1872.

Twain became was a man who clearly knew the art of travel and the importance of good luggage. He was known to use his travelling trunks as writing desks whilst on the road, and even made notes on the wooden interiors when he ran out of paper.

Dating from a pivotal period in Twain’s career, as he published his first major works and found national acclaim, this trunk could well have once housed his most famous manuscripts including Tom Sawyer and Huckleberry Finn.

Described as "an astounding artifact from arguably the most important author in American literature", the trunk is now expected to fetch more than $25,000.