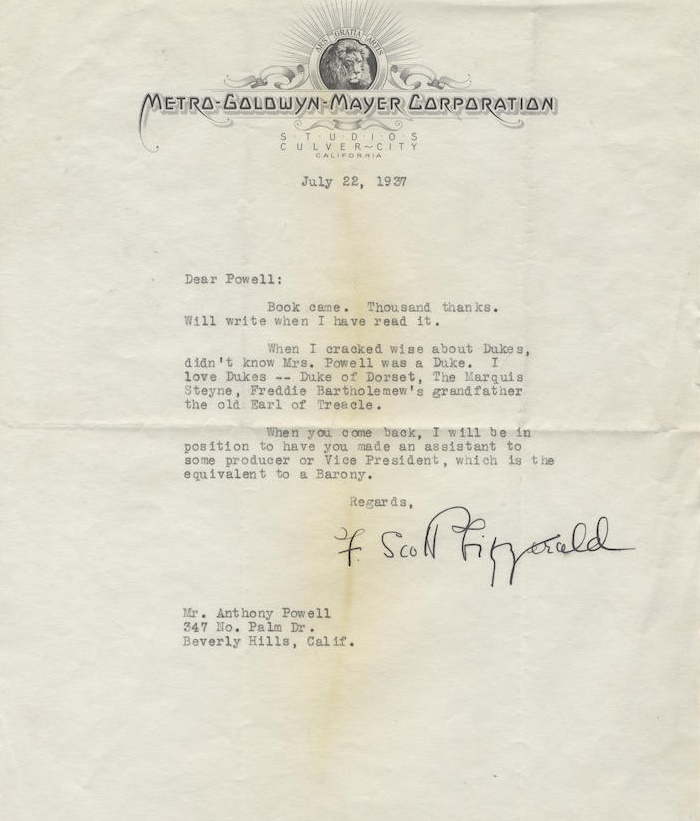 A collection of letters written by some of the biggest names in 20th century literature is expected to sell for more than $100,000 at Bonhams later this month.
The letters were all written to the English novelist Anthony Powell (1905-2000), best known for his twelve-volume work A Dance to the Music of Time which he wrote over the course of 30 years.

Throughout his career Powell corresponded with countless writers including Evelyn Waugh, TS Eliot, John Betjeman, F. Scott Fitzgerald, Graham Greene and Phillip Larkin, many of whom were public admirers of his work.

"Anthony Powell was at the very heart of literary and cultural life in Britain for much of the 20th century," said Bonhams Head of Books and Manuscripts, Matthew Haley. "Looking through these amazing letters, you realize that there was no one in the world of literature that he didn’t know and correspond with.

"The letters provide a fascinating window into this world – the authors’ rivalries and their views on each other’s work. Although this correspondence has been available to scholars, it hasn’t been offered for sale before and so I expect a great deal of interest."

Amongst the collection is a major collection of correspondence with Evelyn Waugh, author of celebrated works including Brideshead Revisited, which includes letters about Waugh’s first novel and the break-up of his marriage.

Further notable examples include poignant letters from poet Philip Larkin, who writes "How dull old age is apart from anything else!" and claims that "Poetry packed me up about five years ago"; a professional falling-out between Powell and Brighton Rock author Graham Greene, who claimed Powell’s work on the life of John Aubrey as "A bloody boring book"; and a letter from The Great Gatsby author F. Scott Fitzgerald, following a meeting between the pair in the canteen of MGM Studios.

The archive of letters will cross the block as part of Bonhams’ Fine Books and Manuscripts Sale in London on June 15.