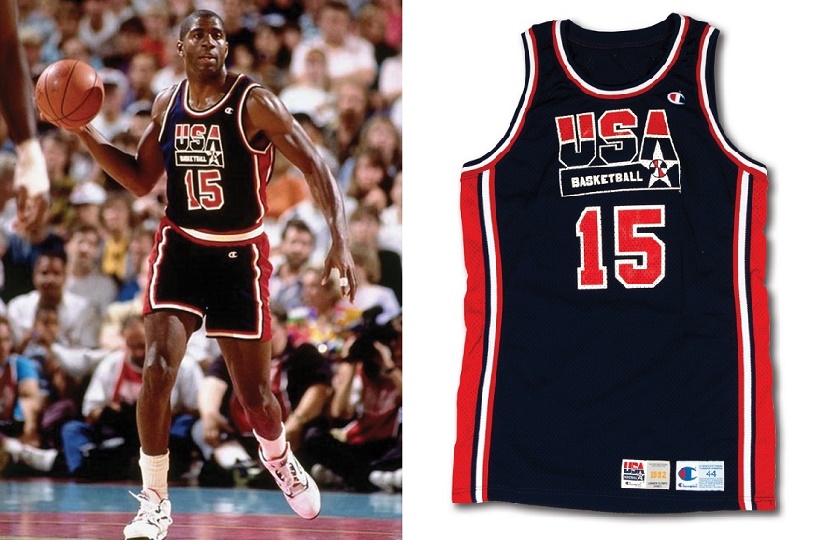 A jersey worn by basketball legend Magic Johnson as part of the famous 1992 Olympic ‘Dream team’ is up for sale this month at SCP Auctions.

The game-worn jersey is expected to sell for more than $25,000 during the online sale, which runs from September 11 until September 28.

Johnson wore the jersey during the Olympic quarter-finals as the USA swept to victory against Puerto Rico 115-77, scoring 13 points and providing 7 assists.

The jersey is the only known photo-matched Dream Team jersey ever offered for auction, and originates from a renowned private collection known as the Hollywood Agent Collection.

Earvin ‘Magic’ Johnson remains one of the most iconic players in basketball history, whose talents led the Los Angeles Lakers to five NBA championships during the team’s ‘Showtime’ era in the 1980s.

However, in 1991 he was diagnosed with HIV and sadly retired from basketball, facing opposition from several other NBA players

Johnson was hailed as a hero by many for his openness about his diagnosis, and went on to become a powerful advocate for AIDS awareness and education.

Despite his retirement he was later voted by fans as a starter for the 1992 NBA All-Star Game and was awarded the MVP trophy, scoring 25 points with 9 assists and 5 rebounds.

This triumphant return to the court saw him called up to the 1992 USA Olympic Basketball Team, serving as co-captain alongside his friend and rival Larry Bird.

A change in Olympic laws had allowed professional players to compete in the basketball tournament for the first time, and the USA assembled a team of the NBA’s biggest stars into a squad known as ‘The Dream Team’.

The team, which also featured the likes of Michael Jordan, Charles Barkley, Patrick Ewing and Scottie Pippen, has been described as “the greatest sports team ever assembled”.

Unsurprisingly, the team dominated the tournament, thrilling audiences around the world and winning every game by an average of 44 points.

The Olympics provided Magic Johnson with a fitting comeback and a personal highpoint to his career, but he retired again before the star of the following NBA season.

The extreme rarity and historic nature of the Johnson USA Olympic jersey means it could easily achieve a strong five or even six-figure sum.

Game-worn Olympic jerseys are far rarer in the hobby than NBA jerseys, and photo-matched examples are even rarer still.

Despite making his name as the greatest player in history with the Chicago Bulls, the auction record for a game-worn Michael Jordan jersey was set by his photo-matched 1984 USA Olympic jersey, which sold in 2017 for $274,000.