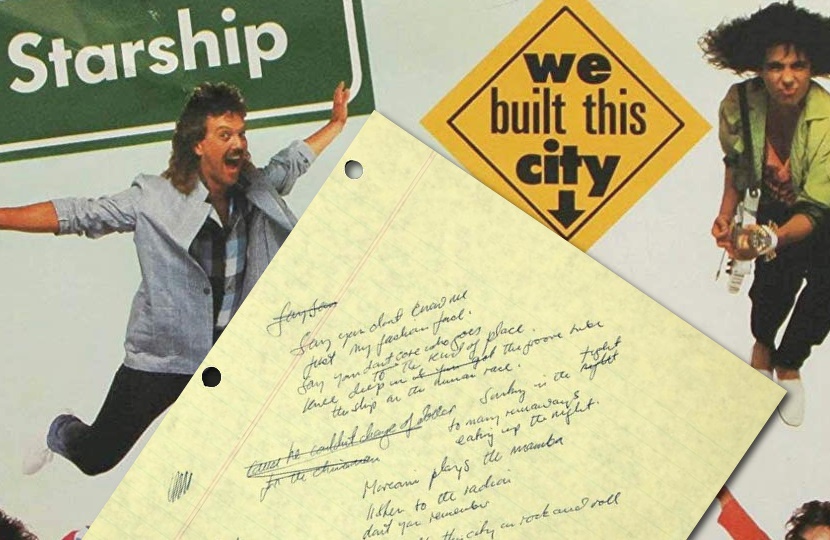 It’s been voted as the world’s worst rock song ever recorded – and now the original lyrics to Starship’s ‘We Built This City’ are going up for auction.

The song was hit #1 in the U.S Billboard charts in 1985 and was certified gold, but has since regularly topped polls as the most hated song in musical history.

The handwritten lyrics, by award-winning songwriter Bernie Taupin, are expected to fetch $6,000 – $8,000 when they hit the block at Julien’s Auctions on November 9.

The sale features the personal collection of Taupin, who is best known as the songwriting partner of Elton John, and responsible for classics such as ‘Rocket Man’, ‘Tiny Dancer’, and ‘Goodbye Yellow Brick Road’.

But in the 1980s Taupin worked with a number of other artist, including the American soft rock band Starship, who also recorded the 1987 smash hit “Nothing’s Gonna Stop Us Now”.

The band had started out at Jefferson Airplane, who produced acid-soaked psychedelia in the 1960s such as ‘White Rabbit’, but as various members left or passed away they changed both their name and their musical direction.

First they became Jefferson Starship, then simply Starship, and their 1985 album ‘Knee Deep in the Hoopla’ featured bombastic, radio-friendly choruses and some incredibly 80s synthesizers.

Some of the band members were dubious about this new sound but it brought huge commercial success, and they scored a series of number one records for the first time since 1975.

For many people, ‘We Built This City’ stands for everything that was terrible about 1980s corporate rock (which is, to say, a lot).

The track rails against the commercialization of rock and roll, with lines such as “Someone’s always playing corporation games, who cares they’re always changing corporation names” and “Who counts the money underneath the bar”.

But at the same time it was clearly produced to be as commercially successful and radio-friendly as is musically possible – and the apparent hypocrisy was not lost on music critics.

In 2004 Blender magazine voted the song as the worst song ever recorded, in conjunction with the VH1 Special ‘The 50 Most Awesomely Bad Songs…Ever’.

Blender editor Craig Marks later said “It purports to be anti-commercial but reeks of ’80s corporate-rock commercialism. It’s a real reflection of what practically killed rock music in the ’80s.”

“The outpouring of bile against this song was amazing. A few people claimed to be able to scientifically prove that We Built This City is the worst song ever. It really felt like we’d hit a nerve in the collective unconscious.”

Since then the song has grown in notoriety, and in 2011 it topped a Rolling Stone magazine online reader’s poll as the worst song of the 1980s.

The winning margin was so large that the magazine stated “[it] could be the biggest blow-out victory in the history of the Rolling Stone Readers Poll”.

Then in 2016 GQ magazine described the song as “the most detested song in human history”, and interviewed Taupin and members of Starship about its production.

“The original song was … a very dark song about how club life in L.A. was being killed off and live acts had no place to go,” said Taupin. “[Producer Peter Wolf] got a hold of the demo and totally changed it … If you heard the original demo, you wouldn’t even recognize the song.”

Wolf added the soaring chorus and a barrage of synth lines, and said “It sounded like nothing else on the radio and had a very in-your-face, hard-edged machine bottom. Yes, I’m proud of it. Sure. The mockery came way later.”

Taupin’s original lyrics also include the infamous line “Marconi plays the mamba” – the meaning of which still remains a mystery to everyone involved.

According to lead singer Mickey Thomas: “Bernie didn’t say “mambo,” he said “mamba,” which is a snake…Maybe it means: If you don’t like this music, some really angry snakes are gonna come out of the speakers.

Today ‘We Built This City’ remains both a hit with live audiences, and a genuine guilty pleasure for music fans around the world.

Not only has it featured in countless adverts and memes, but it was also given the ultimate distinction of being performed by the Muppets in their 2011 return to the big screen.

For Mickey Thomas, the dubious honour of singing the most hated song in history is one he wears with pride to this day.

“I was upset at first, but the article was written with quite a bit of humor, so after about an hour, I laughed about it,” said Thomas. “I’m still here and Blender’s not…I do 60 to 75 shows a year, and it’s probably the most popular song in the show.”

The sale at Julien’s also includes Taupin’s handwritten lyrics for hits such as the 1997 version of ‘Candle in the Wind’, which sold a record 33 million copies and remains the biggest-selling single in chart history.

However, for collectors with a sense of irony, the chance to proudly own the original lyrics to the world’s worst rock song may be too good to miss.