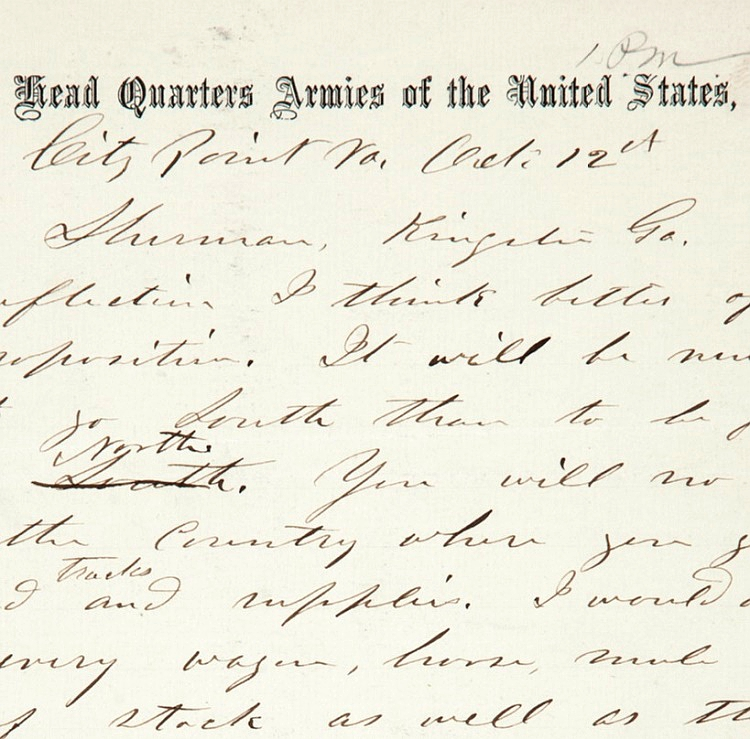 One of the most important letters ever sent during the U.S Civil war is heading for sale at Heritage Auctions this month.

The document was sent in October 1864 by Ulysses S. Grant to General William T. Sherman, approving his famous ‘March to the Sea’.

The letter authorized one of the most decisive campaigns of the war, and is expected to sell for more than $75,000 when it goes under the hammer in Dallas.

Also known as the ‘Savannah Campaign’, the mission saw General Sherman lead his Union army troops to capture the port city of Savannah, Georgia in December 1864.

The troops left a trail of destruction in their wake which effectively crippled the Confederate army, by destroying numerous industrial and military targets along the way.

In a letter dated October 1, Sherman told Grant of his plan to “destroy Atlanta and then march across Georgia to Savannah or Charleston breaking roads and doing irreparable damage”.

He stated “Until we can repopulate Georgia it is useless to occupy it, but the utter destruction of its roads, houses and people will cripple their military resources….I can make the march and make Georgia howl.”

The letter offered at Heritage Auctions is Grant’s eventual reply, which gave Sherman the go-ahead for his ‘scorched earth’ tactics.

“On reflection I think better of your proposition…You will no doubt clean the country where you go of rail-road tracks and supplies. I would also move every wagon, horse, mule and hoof of stock as well as the negroes. As far as arms can be supplied either from surplus in hand or by capture I would put them in the hands of negro men, give them such organization as you can. They will be of some use.”

The handwritten letter was sent to Sherman via an encoded telegram, evidenced by the term _”_cipher” written in the upper left corner.

“Grant hesitated at first and did not initially agree with Sherman’s strategy,” said Sandra Palomino, Director of Historical Manuscripts at Heritage Auctions.

“In the remarkable letter offered here at auction, Grant, confident in Sherman’s ability, finally relented and gave his permission to Sherman to carry out his proposed march to the sea.

“This single military strategy had far-reaching effects, that hastened the end of the war and ensured Abraham Lincoln’s re-election.”

The historic telegram was originally owned by R. Douglas Stuart, former U.S. Ambassador to Canada and chairman of the Quaker Oats Company.

Having been acquired in 1922, the document has remained in private hands ever since, and will be offered for sale publically for the first time in almost a century on October 12.