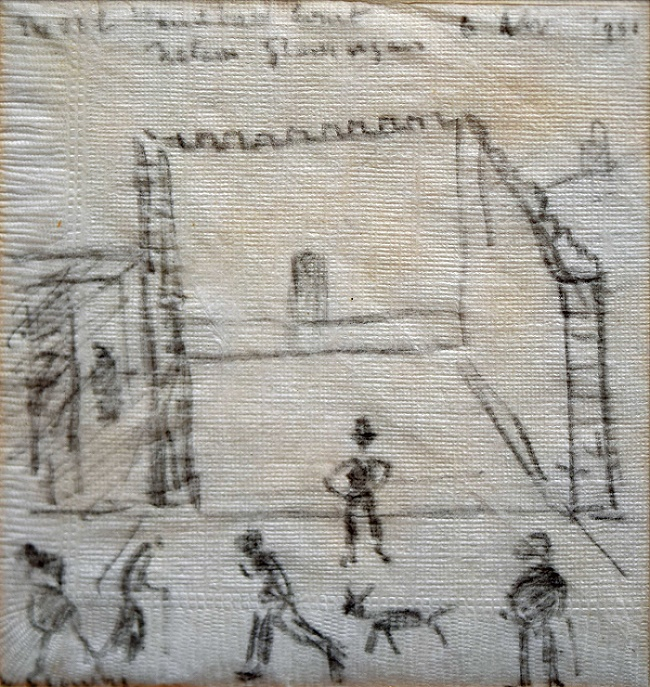 A sketch doodled on a paper napkin by the celebrated British artist L.S Lowry has sold for more than £8,500 at auction.
The sketch, dated November 6, 1961, was drawn by Lowry on a trip to Wales and depicted an old handball court in the village of Nelson, Glamorgan.

During the later years of his career Lowry became friends with Ebbw Vale businessman Monty Bloom, who served as one of his most important patrons, and encouraged him to visit South Wales in search of inspiration from the region’s rugged natural and industrial landscapes.

"The trips encouraged Lowry, then aged 77, to embark on a new era of painting, working in a new, intuitive and experimental way," said Stephen Sparrow, paintings specialist at Peter Wilson Fine Art Auctioneers in Cheshire, where the sketch was sold.

"Together, Lowry and Bloom made visits to the area every six months or so and it is thought this sketch may have been done when the two men stopped for refreshment in a local café. One can well imagine Lowry drawing this whilst in discussions with Bloom and noting the exact location where he had seen the distinctive free-standing handball court in Nelson, now a listed building."

Lowry added a series of instantly recognizable figures and a dog into the foreground of the sketch, and liked it enough to keep the paper napkin rather than discard it when he left the cafe.

Lowry later gave the napkin sketch as a gift to the artist Percy Warburton, the Head of Bury School of Art. It was one of several artworks, including drawings and paintings, that he gave to Warburton throughout their friendship, during which time Lowry became actively involved with the Bury Art Society and later became its second president.

Warburton subsequently gave the sketch to a family in Cheshire, and it eventually hit the auction block on April 28, where it fetched a final price of £8,680 ($12,599).