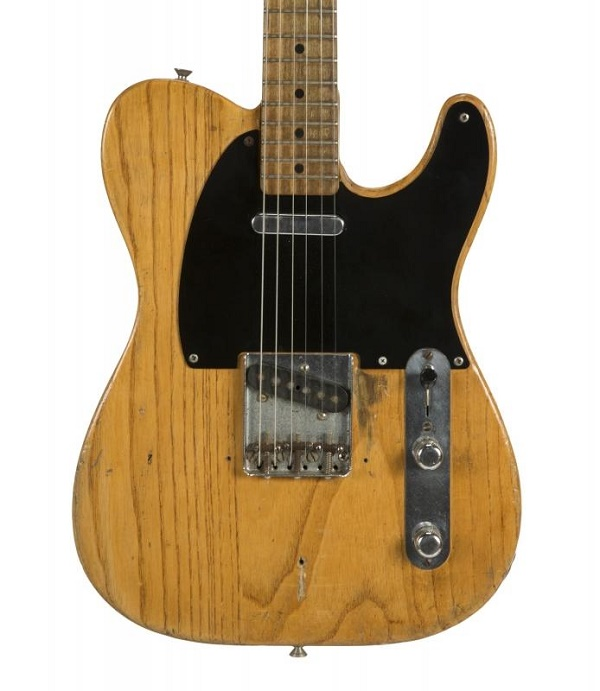 The first professional electric guitar owned by Stevie Ray Vaughan will be offered for sale at Julien’s this month.
The guitar, a 1951 Fender Broadcaster, will lead the Music Icons sale in New York which also features a wealth of rare instruments, hand-written lyrics, stage-worn outfits and personal memorabilia from the likes of John Lennon, Madonna, Elvis Presley, Freddie Mercury and Lady Gaga.

The tragically short-lived Vaughan is regarded as one of the most influential blues guitarists of the modern era. He was inspired to pick up a guitar at the age of seven by his older brother Jimmie, himself a talented blues guitarist, and was performing with local bands in Texas by the time he was a young teenager.

After regularly borrowing his older brother’s guitars without permission, the pair argued until their friend Doyle Bramhall intervene, telling Jimmie "Man, why don’t you just give it [the Broadcaster] to him? You really don’t play it anymore at shows. If you do that, maybe he’ll leave all your other shit alone."

Jimmie handed over the guitar to his kid brother, complete with his nickname ‘Jimbo’ carved in the back, and Stevie Ray Vaughan had his first professional electric guitar.

Stevie then concentrated his efforts, practicing day and night and often falling asleep holding the guitar. He snuck out with it and played in nightclubs until 6:00 am, then took it to school the next morning. In 1970, when Vaughan made his first trip to a recording studio with the band Cast of Thousands, it was ‘Jimbo’ he played.

According to Vaughan’s biographer Craig Hopkins:

"The significance of the ‘Jimbo’ guitar cannot be overstated. This is the guitar with which Stevie developed his style and launched his career. He went from a poor kid trying to impress the girls to a committed professional guitarist playing gigs in seedy dives until the early morning hours.

"’Jimbo’ is not only one of the most important guitars in Stevie’s development; it is the only early Vaughan guitar in the hands of collectors that has been positively identified. This guitar, which has hung in the GRAMMY Museum alongside Stevie’s famous "Number One" Stratocaster, is believed to be one of only two of Stevie’s primary stage guitars to come on the market in the last 25 years."

In the earkly 1970s Vaughan traded ‘Jimbo’ with Geoff Appold, a Dallas-area music teacher, for a red Epiphone guitar, but the loss of the instrument haunted him in later life. In 1989, just a year before his death in a helicopter crash, he stated in an interview:

"[Jimmie] gave me a ’51 Tele, a cross between a Broadcaster and a Tele that I rebuilt and ended up letting someone talk me into selling and I’m still kicking myself! Still looking for it, by the way! So if somebody finds a guitar that says ‘Jimbo’ on the back and it’s the right one, it’s a real deal – you can come rape me for it, or my pocketbook anyway!"

Sadly it was never possible to return the guitar to Stevie, but in recent years it has remained as a tribute to his talent. Described quite rightly as "part of blues and rock and roll history", the historic instrument will be offered at Julien’s with an estimate of $400,000-$600,000.

The Julien’s Music icons sale takes place at the Hard Rock Cafe in New York’s Times Square on May 21.