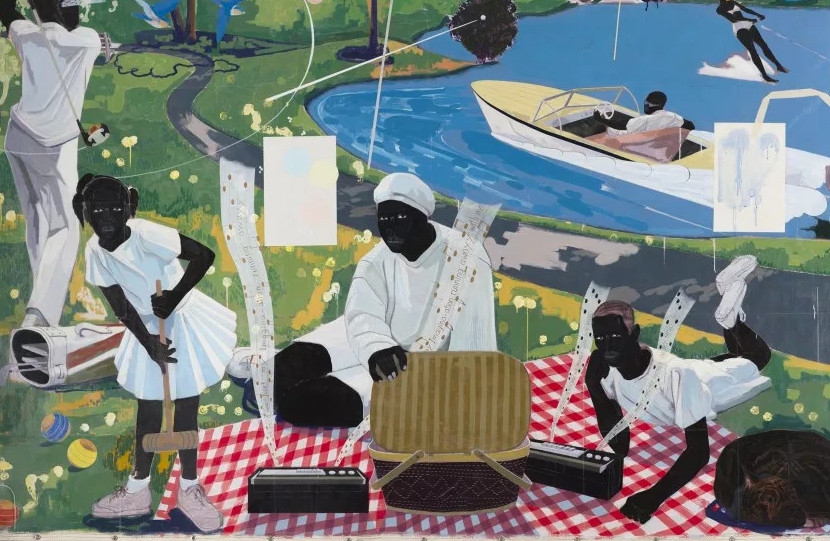 Among the key influences is the work of Georges Surat; who’s “A Sunday Afternoon on the Island of La Grande Jatte” is housed in the Art Institute of Chicago (as Ferris Bueller fans will recall).

Saara Pritchard, senior specialist in contemporary art at Sotheby’s, said: “Artistically complex, politically engaged and career-defining, it is an awe-inspiring work of art; standing in front of this astonishing painting, one uncovers layers of meaning and discovery in each and every detail of this richly-laden work.

“A highly anticipated feature of our Contemporary Art Evening Auction, Past Times joins a cast of exceptional works by living artists, including those donated for Creating Space: Artists for The Studio Museum in Harlem.”

The work is consigned from the collection of Chicago’s Metropolitan Pier and Exposition Authority (MPEA). The organisation acquired the work for its offices in McCormick Square in 1997 for $25,000.

The piece was at the centre of Marshall’s well received retrospective shown in Chicago and New York last year. It’s almost certain to set a new auction record for the artist, whose top result is the $5m paid for a portrait of American abolitionist and suffragette Harriet Tubman last year.

Marshall is already one of the world’s most valuable living artists. Should the work hit its top estimate, he’ll be approaching a top 10 position.