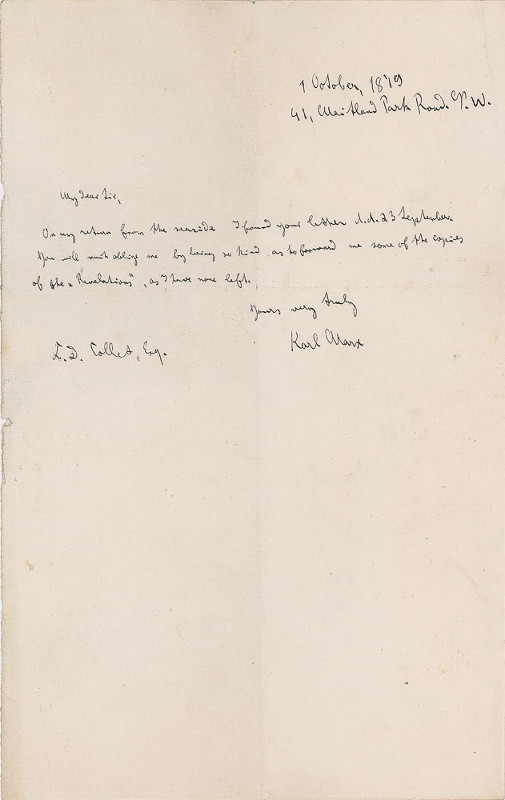 A handwritten letter from Karl Marx was among the stars of RR Auction’s March 7 sale.
The lot, dating to 1879, achieved $53,500. That’s a huge result given just how short the text is.

It reads: “On my return from the seaside I found your letter d’d 23 September. You will much oblige me by being so kind as to forward me some of the copies of the ‘Revelations,’ as I have none left.”

The header is 41 Maitland Park Road, one of Marx’s addresses in London – a city that became his home in 1849 after he was forced out of Paris for his perceived dangerous ideas. He remained there until his death in 1883.

So why the enormous sum? The fact is original writings from Karl Marx are extremely rare. The vast majority are held by museums, so the few floating around on the private market are highly prized.

The record is $678,000 for a letter that mentions his masterwork Das Kapital.

A signed photograph of Mahatma Gandhi was a surprise hit, achieving $41,806 against an estimate of around $10,000.

Gandhi signed the photo in London in September, 1931, while attending a Round Table Conference. This series of meetings between the British and Indian National Congress aimed to establish the framework for India’s future.

Gandhi, as head of the organisation, aimed to bring constitutional reform to the nation. Meanwhile the British were keen to keep things largely as they were, with India as a colony of the empire.

On his return to India the following year, Gandhi called for satyagraha (non-violent resistance) and was promptly arrested by the Raj.

The piece has a connection to a key moment in Gandhi’s life. The result looks to be due to the growing buying power of a newly wealthy India.