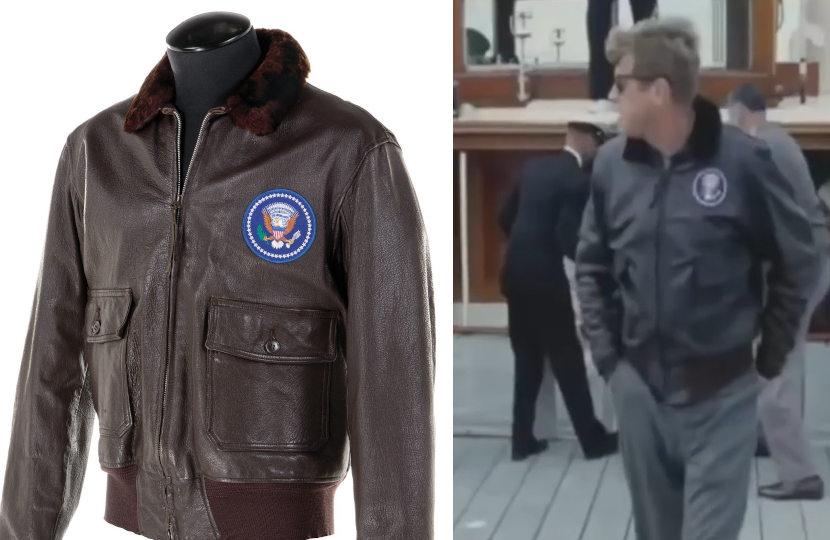 John F. Kennedy’s Presidential bomber jacket is heading for sale next month, during an auction of historic memorabilia at Profiles in History.

Kennedy had a life-long love affair with the sea, and was said to have spent some of the happiest times of his presidency on board the yacht with family and friends.

The 93-foot wooden yacht had previously been used by Presidents Truman and Eisenhower, before Kennedy renamed it Honey Fitz after his maternal grandfather, John Francis “Honey Fitz” Fitzgerald.

Amongst his many duties, Hirschy was responsible for supply and logistic support for Kennedy at Camp David and aboard the presidential yachts.

The jacket is accompanied by the original official U.S. Navy invoice, dated December 5, 1962, for the purchase of “3 Flight jackets sold to Pres US”.

Two of these were listed amongst the items sent to Hirschy; one featuring the seal of the Marine One presidential helicopter (HMX-1), and the second bearing Kennedy’s seal, which Hirschy was allowed to keep as a memento.

The present jacket also comes with the original paperwork Hirschy received listing Kennedy’s personal items from the yacht, and documents including his White House Staff badge, further adding to its superb provenance.

It’s believed the third flight jacket listed on the invoice may be the near-identical one Kennedy wore aboard Air Force One, and later gifted to his long-time friend David F. Powers.

Powers went on to serve as curator of the John F. Kennedy Memorial Library, and during a sale of his estate in 2013 the historic jacket sold for $655,000, more than 10 times its estimate.

Profiles in History will be hoping for a similar result when the historic jacket hits the block on July 23.