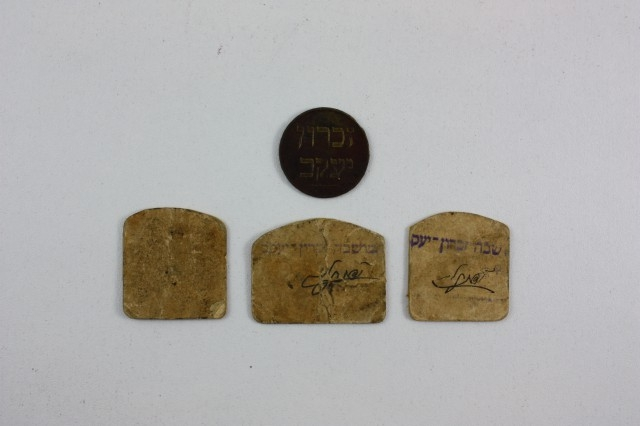 Looking to add to your Jewish artifact collection? Take a look at Jerusalem of Gold’s upcoming auction.

Among the star attractions are three rare tokens from Zichron Ya’akov, which lies 35 kilometres from Haifa in Israel.

In the 1880s, Baron Edmond de Rothschild – the patron of Zichron Ya’akov – issued the tokens to local peasants as part of their wages. The peasants could use the tokens to buy items from the town’s shops, which the Baron owned.

Selling as a single lot, along with a brass token also issued by the Baron, they have a starting bid of $20,000.

"Additional copies are unknown to us," says the auction house of the paper tokens, suggesting the possibility they could be unique.

Also on offer is a rare 1940 Chinese marriage certificate of a Jewish German couple.

Hugo and Rose Weiss escaped from Austria to Shanghai at the outbreak of the second world war.

They were among 8,200 Jews who fled Germany and Austria for the Chinese city following the Nazi invasion of Austria in 1938.

Shanghai was a popular destination for Jews at that time because they didn’t require a visa or passport to enter.

Hugo and Rose were the parents of Professor Daniel Weiss, the present chief scientist at Israel’s Ministry of Science and Technology. The certificate has a $10,000 starting bid.

An oil on cardboard work by Jewish artist Moshe Mokady, depicting Jerusalem, also features. The piece, which Mokady produced in the 1930s, has a starting bid of $20,000.

The auction takes place in Jerusalem on February 23.