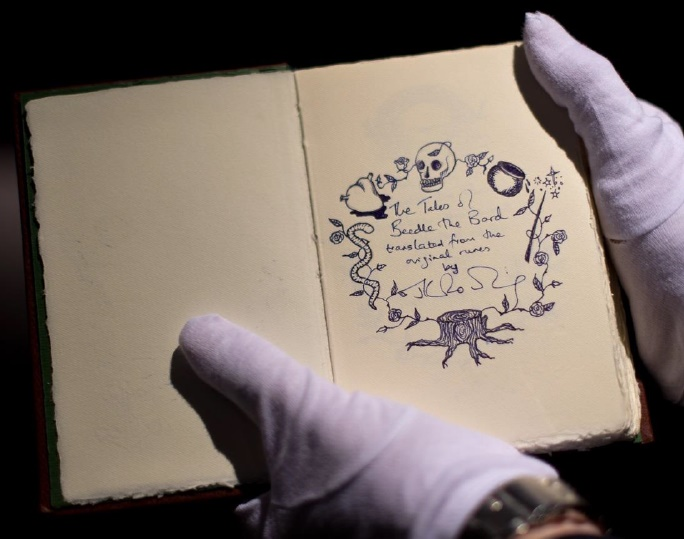 A rare copy of J.K Rowling’s manuscript The Tales of Beedle the Bard will be sold at Sotheby’s next month.
The unique, hand-written work by the Harry Potter author is expected to sell for around £500,000 ($625,000).

The Tales of Beedle the Bard was originally a fictional book of wizarding fairy-tales, first mentioned in Harry Potter and the Deathly Hallows, the seventh and final book of the series.

In the story, Albus Dumbledore presents Hermione Granger with a copy of the book, which contains vital clues in Harry Potter’s final mission to destroy Lord Voldemort’s Horcruxes.

In the real world, Rowling produced just seven original copies of the book, each hand-written and illustrated, and presented in uniquely-decorated leather bindings.

Rowling created six copies as personal gifts for "those most closely connected to the Harry Potter books", and a seventh copy to be sold to raise funds for her children’s charity Lumos.

That seventh copy hit the auction block at Sotheby’s in 2007 for £1.95 million ($3.98 million), setting a new world record price for a modern literary manuscript and placing it amongst the most valuable books in history.

The copy set to be offered at Sotheby’s, number three of seven, was gifted to Barry Cunningham, the publisher who famously launched Rowling’s career when he agreed to publish the first book in the series, Harry Potter and the Philosopher’s Stone.

Decorated with semi-precious stones and a sterling silver mounted skull, the book also bears the personal inscription: "To Barry, the man who thought an overlong novel about a boy wizard in glasses might just sell… THANK YOU".

Cunningham will now offer the book at auction with Rowling’s blessing, and will donate some of the proceeds from the sale to Lumos.

"The personal resonance of this book makes this both an exceptional and highly desirable object to come to auction," said Dr. Philip W. Errington, Director of Sotheby’s Books and Manuscripts Department.

"It is particularly special as it is only one of six made for those closest to the author throughout the journey of creating the Harry Potter series, gifted to the man who recognised the brilliance of J.K Rowling’s writing and her potential impact on children’s literature."

The unique manuscript, regarded as "a major piece of Harry Potter history", will be sold at Sotheby’s in London on December 13.