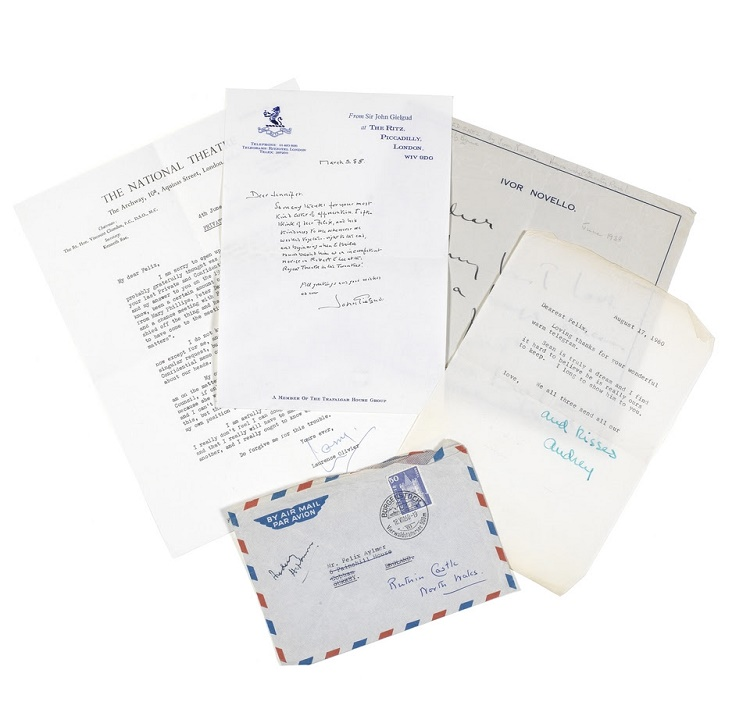 A collection of rare personal letters written by screen icon Audrey Hepburn will be offered for sale at Bonhams later this month.
The letters were written between 1951 and 1960, as Hepburn went from a relative unknown to one of the world’s biggest stars, and offer an intimate insight into her personal life.

They were written by Hepburn to Sir Felix Aylmer, an English Shakespearean actor who served as both an elocution coach and a father figure to Hepburn during the early days of her career.

In 1951 Hepburn landed a small role in the film Monte Carlo Baby, having previously performed in the chorus line of several West End shows. She writes to Aylmer: "Would you believe it, I’m in Monte Carlo working on a French picture. The place is heavenly and this is the best thing that’s ever happened to me."

It was during filming that she was spotted in a Monte Carlo hotel by the French novelist Colette, who decided to cast Hepburn in the title role in her Broadway adaptation Gigi – the role which set her on the way to stardom.

The letters document Hepburn’s struggles to balance her soaring career with her personal life, and the heartbreak she suffered after her engagement to socialite James Hanson was called off.

"I fear I thought it possible to make our combined lives and careers work out," she writes in 1953, after Hanson was photographed leaving nightclubs in London with a variety of women, as Hepburn filmed her movie breakthrough Roman Holiday on location with Gregory Peck.

She also wrote to Aylmer regarding her relationship with actor Mel Ferrer, after the pair met at a party in London. "We want to keep it a dark secret in order to have it without the ‘press’," she wrote in 1954, a few weeks before the couple married in Switzerland "in a tiny chapel with a wedding breakfast after".

Sadly Hepburn suffered two miscarriages between 1955 and 1959, but the final letter in the collection expresses her delight in giving birth to her son Sean in 1960. "Sean is truly a dream’, she exclaimed, ‘I find it hard to believe he is really ours to keep. I long to show him to you. We all three send our love and kisses, Audrey."