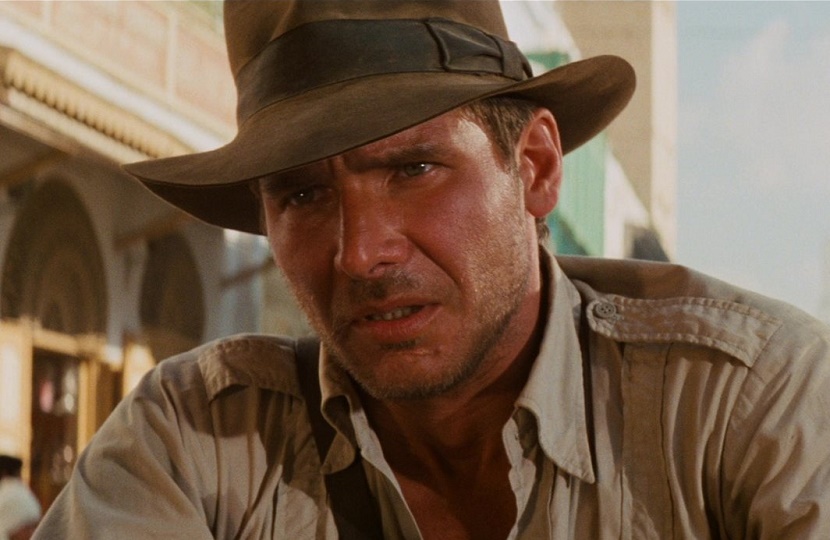 Ford's hat is arguably the most famous in movie history (Image: Lucasfilm Ltd)

It’s arguably the most famous hat in movie history – and now Indiana Jones’ signature Fedora is heading for the auction block in the U.K this week.

The Prop Store sale in London on September 20 will feature a treasure trove of classic movie memorabilia, including three of the most iconic props used by Harrison Ford in the Indiana Jones series.

First up is the hat worn on-screen in Raiders of the Lost Ark, regarded as one of the greatest films of all time.

Designed by costume designer Deborah Nadoolman and made by the Herbert Johnson Hat Company, the fedora was worn extensively by Ford throughout the production.

The hat comes with superb provenance, as its unique markings make it possible to screen-match it with many of the film’s most famous moments.

These include the visit to Marion Ravenswood’s bar in Mongolia; the street chase and face-off against the swordsman in Cairo; digging for Ark in Tanis; the encounter with a Cobra in the Well of Souls; the fist-fight with a German mechanic beneath an aircraft wing; and the famous dessert truck chase.

Several whips were made for use during the series, and this example appeared on-screen in the 1984 sequel Indiana Jones and the Temple of Doom.

The 10ft-long whip was skilfully wielded by Ford who learned how to use it on set in-between takes, despite suffering from a wrist injury sustained in his former career as a carpenter.

The gun is one of two modified Smith & Wesson Hand Ejector Mk II (HE II) pistols used by Ford during filming both at Elstree Studios and on location in Tunisia.

Amongst the most famous moments featuring the gun is the short-lived duel between Jones and a sinister swordsman in a Cairo market square.

The original script featured a spectacular fight between the pair, who had trained for months in preparation.

However, on the day of the shoot Ford was suffering from food poisoning and suggested that he simply shoot the swordsman instead. Steven Spielberg agreed, and one of the most celebrated scenes in movie history was created by happy accident.

Indiana Jones regularly tops both critic and fan polls as cinema’s greatest character, and the trio of lots offered at the Prop Store marks a significant opportunity for high-end collectors.

The current record price for an item of Indiana Jones memorabilia was set in 2010, when Ford’s personal copy of the ‘Raiders’ shooting script featuring his handwritten notes sold at Profiles in History for $100,000.

The London sale will also give Harrison Ford fans the chance to acquire a jacket worn in his equally famous role as Han Solo in Star Wars: The Empire Strikes Back.

The instantly recognisable blue jacket will lead the auction with an estimate of up to £1 million ($1.31 million).