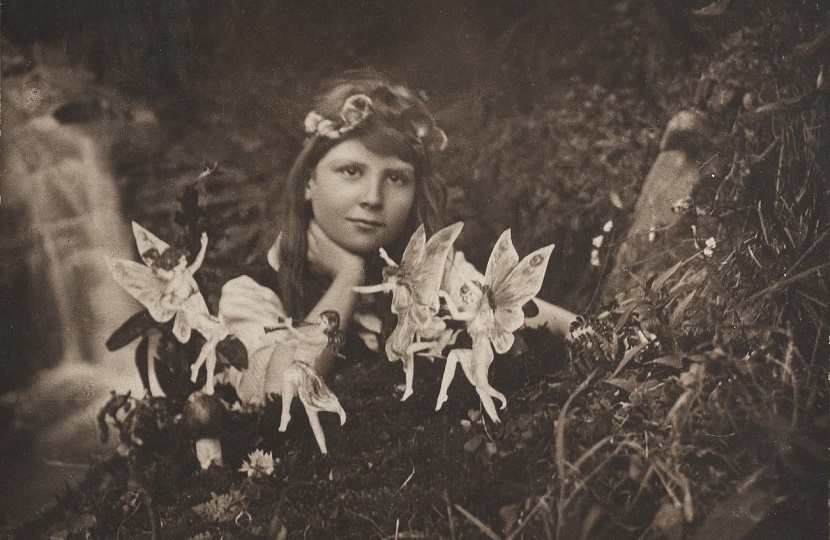 The Cottingley Fairy photographs caused one of the biggest hoaxes of the 20th century (Image: Dominic Winter Auctions)

Two photographs of the ‘Cottingley Fairies’, one of the most famous hoaxes of the 20th century, are up for auction in the U.K next month.

The photographs were created in 1917 by a pair of English schoolgirls using cardboard cut-out figures, and fooled many into believing in the existence of fairies.

Each of the antique prints is expected to sell for up to £1,000 when they cross the block at Dominic Winter Auctions in Cirencester on October 4.

The photographs were the work of 16-year-old Elsie Wright and her nine-year-old cousin Frances Griffiths, who took them at the end of Elsie’s garden in the Yorkshire village of Cottingley.

Elsie copied the images of fairies from children’s books, then created cut-out figure which were supported by hat pins.

Elsie’s father was a keen amateur photographer, and the pair used his equipment to capture and develop their ‘evidence’. Arthur Wright wasn’t fooled and told them to stop tampering with his camera – but his wife Polly believed they were real, and took them to a meeting of the Theosophical Society in Bradford.

The simple practical joke took on a life of its own, when society member Edward Gardner had copies printed up to sell at his lectures as proof of the supernatural.

The photos then came to the attention of Sherlock Holmes author Sir Arthur Conan Doyle, a dedicated believer in spiritualism, who had them published in an issue of The Strand Magazine to accompany his own article on the existence of fairies.

He wrote: “The recognition of their existence will jolt the material twentieth century mind out of its heavy ruts in the mud, and will make it admit that there is a glamour and mystery to life.”

The photographs captured the public’s imagination and sparked a national debate, with many otherwise rational people fooled into believing they were genuine.

More sceptical and scientific minds declared the images were clearly fake, and noted that the fairies had suspiciously “fashionable hairstyles”.

It wasn’t until 1983 that the grown-up Wright and Griffiths finally admitted the photographs had been faked, although they also still maintained they had seen the fairies with their own eyes.

In a 1985 TV interview Frances later said “I never even thought of it as being a fraud – it was just Elsie and I having a bit of fun and I can’t understand to this day why they were taken in – they wanted to be taken in.”