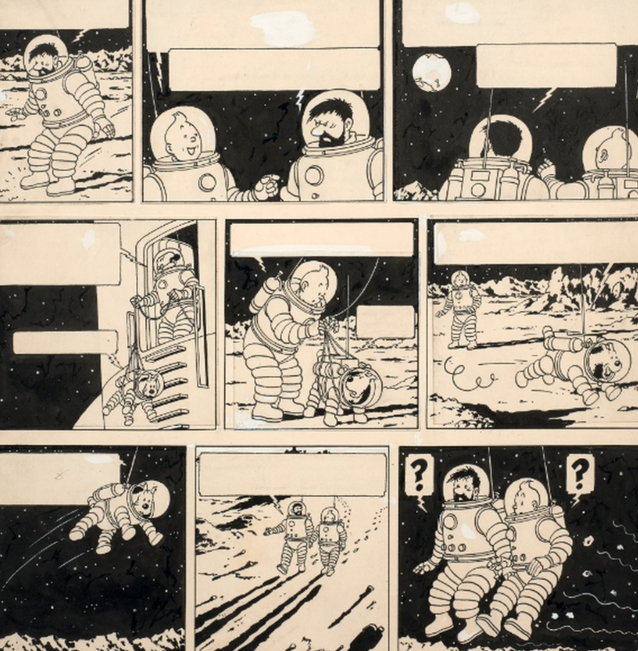 A page of Herge’s original artwork for a Tintin adventure has auctioned for $1.7 million, doubling its estimate at Artcurial in Paris.
The China ink extract from 1954 work Explorers on the Moon is a record for a single-page comic strip.

It depcits star reporter Tintin, seadog Captain Haddock, Professor Calculus and dog Snowy getting to grips with the Moon’s surface.

"It is one of the most important from Herge’s post-war period, on the same level as ‘Tintin in Tibet’ and ‘The Castafiore Emerald’," he said.

Herge’s Tintin work has cornered the market when it comes to original comic strip illustration records.

A double page spread used as the inside cover for the Tintin books between 1937 and 1958 auctioned for $3.4 million in 2014, while Herge’s original artwork for the cover of The Shooting Star achieved $2.9 million last year.

The Belgian artist produced them in 1942, during the second world war. They depict Tintin in a variety of scenes, including sledging and decorating a Christmas tree.

The war period is a thorny one for Herge historians, as the artist produced Tintin comic strips for Le Soir, a Belgian newspaper that collaborated with the Nazis.

"It is particularly rare to find original Herge creations from the 1940s, very few are up for auction nowadays," adds Leroy.

The sale was boosted by a major Herge exhibition that runs at Paris’ Grand Palais until January.