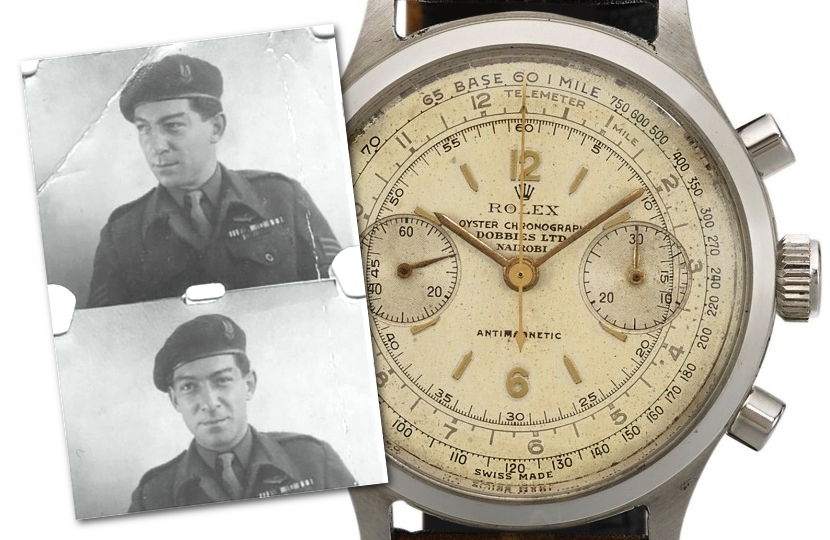 A Rolex watch owned by a WWII POW who helped inspire The Great Escape will sell at Sotheby's on April 16 (Images: Sotheby's)

A Rolex watch owned by a British WWII hero who helped inspire The Great Escape is up for auction at Sotheby’s this month.

The watch belonged to Sergeant Anthony O’Brien, an SAS Sergeant who was captured behind enemy lines and held at the infamous Stalag Luft III POW camp.

He later helped dig tunnels and organize the famous Allied escape plot, which served as a basis for the classic 1963 Steve McQueen film.

Anthony O’Brien originally enlisted into the Kenyan Army in 1937, and later became a Sergeant for the newly formed British first SAS Brigade.

Having seen action during the North Africa Campaign, he was captured behind enemy lines and sentenced to death for being a member of the SAS.

However, his fellow prisoners convinced their captors that O’Brien was in fact a member of the RAF, and he narrowly escaped execution.

Instead he was transported through Italy to a series of POW camps reserved for Allied airmen, and ended up at the notorious Stalag Luft III camp near the German town of Sagan (now Żagań, Poland).

It was there that he became part of the secret committee which organized the famous 1944 escape attempt.

According to accounts, O’Brien was one of the officers in charge of tunnelling operations and camp security, and his exploits are mentioned in several books on the subject.

However, when the committee held a draw to decide who would escape through the tunnel, his name was not pulled out of the hat.

It may have seemed unlucky at the time, but the draw almost certainly saved his life. Of the 76 men who escaped, seventy-three were recaptured and 50 were then executed.

O’Brien survived in the camp until the end of the war, and following his release he returned to Nairobi, where he got married in 1946 and acquired his Rolex watch.

It’s thought that he chose the watch after seeing fellow officers wearing the same model during his time as a POW.

The Rolex chronograph reference 3525 is known to collectors as a ‘Prisoner Of War watch’, as during WWII Rolex offered them free to Allied officers held in POW camps.

Company founder Hans Wilsdorf took the orders, with the understanding that the officers would pay for their watches when they returned home after an assured Allied victory.

He personally oversaw the orders, which resulted in numerous watches being sent out to the same men, as German soldiers would often pocket the first couple of watches sent before the third made its way to the officer who ordered it.

O’Brien acquired his own Rolex 3525 chronograph from Dobbies Ltd of Nairobi, just before the model was discontinued, and the beautifully patinated dial bears the rare signature of the retailer.

He later became a coffee farmer in Uganda, and ended his days as a professional hunter in Kenya and Tanzania.

O’Brien’s Rolex watch subsequently passed down through generations of his family, and is now set to appear on the market for the first time.

Presented in fine condition, the Rolex 3525 Oyster Chronograph is a rare and sought-after watch in its own right; but its connection to a much-storied WWII hero should attract some competitive bidding amongst collectors on April 16.