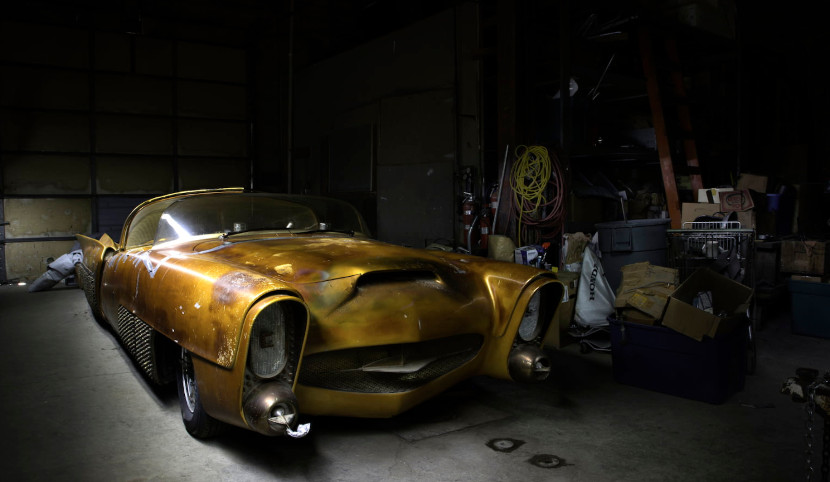 The Golden Sahara II, one of the most spectacular custom cars of all time, is heading to auction at Mecum in Indianapolis on May 15-19 without reserve.
The original Golden Sahara was built by legendary “kustomizer” George Barris, the creator of the Munster Koach (1964) and the original Batmobile (1966).

The original was constructed on the bones of a 1953 Lincoln Capri Barris used as his regular run-around before it was crushed by a truck in 1954. An enthusiast named Jim “Street” Skonzakes offered to fund a custom job on the wreck.

The result was fabulously opulent. The car features a cocktail bar on the rear seat and mink carpeting, while the dashboard is set with a TV and a tape player. It was sprayed with pearlescent paint made from crushed fish scales. This thing is essentially the sleazy mid-50s lounge of your dreams on wheels.

The model made its debut at the 1954 Petersen Motorama in Los Angeles, where it was an enormous hit. It embarked on a tour of the country, partly in an attempt to recoup the $25,000 spent on its construction.

However Street and Barris realised they were on to something with this ludicrous car and decided to double down. In 1956 they spent a further $50,000 adding accoutrements previously confined to sci-fi.

This updated car was dubbed the Golden Sahara II. It featured voice operated remote control that could turn the engine on and off, open the doors and even drive. Audiences went wild for “the car of the future”. It was featured at car shows, on TV shows and even in screwball Jerry Lewis comedy Cinderfella (1962).

In the 1960s the car disappeared, never to be seen again – until now. It’s been stored in a lockup at Street’s home. Following his recent death, the executors of his estate are putting the car up for auction with no reserve. While it’s in need of some TLC, the vehicle is easily the most coveted custom car of all time and could comfortably breach $1m.