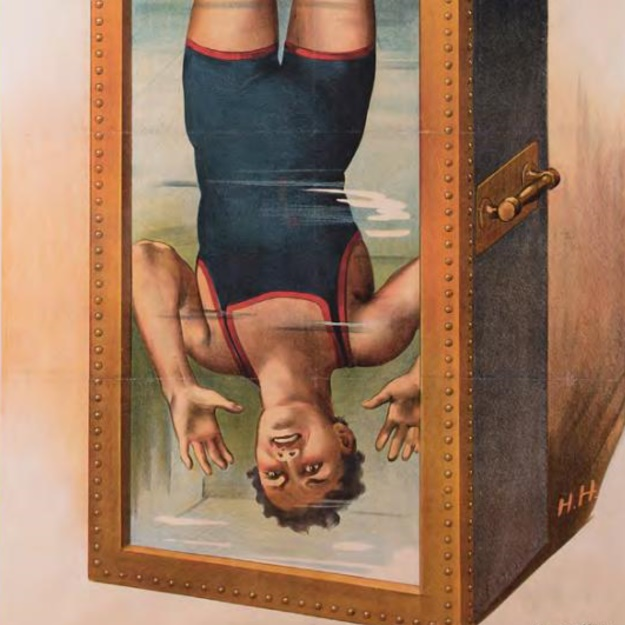 The latest Potter & Potter auction will, offer collectors the chance to acquire rare posters from the Golden Age of Magic.

Leading the sale is a highly rare poster featuring Harry Houdini trapped inside his most famous invention, the Chinese Water Torture Cell.

The original cell was built in England in 1911, and made its public debut at the Circus Busch in Berlin, Germany, on September 21, 1912.

Houdini would suspend himself upside-down in the cell, and then attempt to escape before drowning, always preceded the act with the solemn warning:

"Should anything go wrong when I am locked up, one of my assistants watches through the curtain ready to rush in, demolishing the glass, allowing the water to flow out in order to save my life."

Following his death in 1926, Houdini bequeathed his most famous illusion to his brother Theodore Hardeen, a fellow magician, stating that it must be destroyed. But Hardeen ignored his brother’s wishes and sold the Water Torture Cell to collector Sidney Hollis Radner.

Decades later in 1995, the cabinet was all-but destroyed in a fire at the Houdini Museum in Niagara Falls. However, the original metal frame survived, and it was restored by illusion builder John Gaughan.

Today the Water Torture Cell resides in Las Vegas, on display in the private magic museum of magician David Copperfield, who acquired it in 2004.
Just three copies of the poster are known to exist, with another example previously sold at Christie’s in 2000 for $51,959. The poster on offer at Potter & Potter is expected to fetch up to $80,000.

Another standout lot is a poster depicting one of Howard Thurston’s most famous illusions, The Levitation of Princess Karnac.

In front of a hushed audience, Thurston would levitate his hypnotized assistant Fernanda Myra towards the ceiling, proclaiming: "There she lies, asleep in space, suspended by nothing but the power of thought. There she can remain in peace for two hours, two weeks, two years. The slightest sound, the slightest whisper can disturb her sleep."