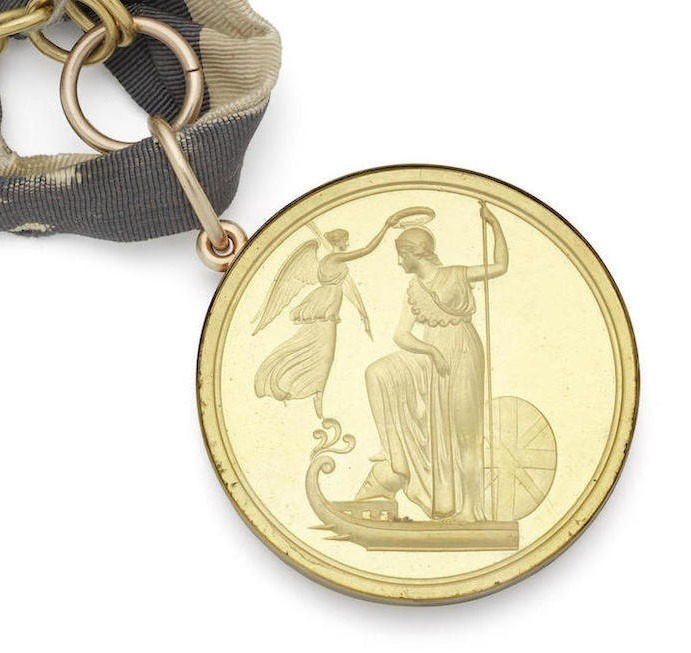 A British naval medal awarded following the French Revolutionary Wars has soared above its estimate at Bonhams in London.
The highly rare medal was one of only seven examples struck to commemorate the victory of the British Fleet at the Battle of the Glorious First of June in 1784.

The battle was the culmination of months of skirmishes, as the British fleet attempted to maintain a blockade of French ports and prevent grain shipments from America to reach a nation on the verge of starvation. It ended with the deletion of the French fleet, which retreated to Brest in Brittany and remained stuck there until the end of the French Revolutionary Wars in 1802.

The medal was awarded to Admiral Lord Graves, captain of HMS The Royal Sovereign, whose long and often unfortunate naval career also saw him court martialed in 1756 during the Seven Years War, and defeated at the Battle of Chesapeake in September 1761, one of the most disastrous British defeats of the American War of Independence.

The medal was sold along with seven log/letter books charting Graves’s naval career, and a Lloyds presentation trophy recognizing the Admiral’s conduct on the "ever memorable 1st of June 1794".

"This was an incredibly scarce and desirable medal in excellent condition and I am not surprised that it was so keenly contested and was sold for such a very high price," said John Millensted, Bonhams Director of Coins and Medals.

Further historic naval medals sold during the auction included a Naval General Service medal awarded to John Cowle, who served aboard the famous HMS Temeraire during the Battle of Trafalgar, which realized £9,600; and the General Service medal awarded to Henry Roofe, who served at Trafalgar aboard the HMS Agamemnon, which realized £12,000.