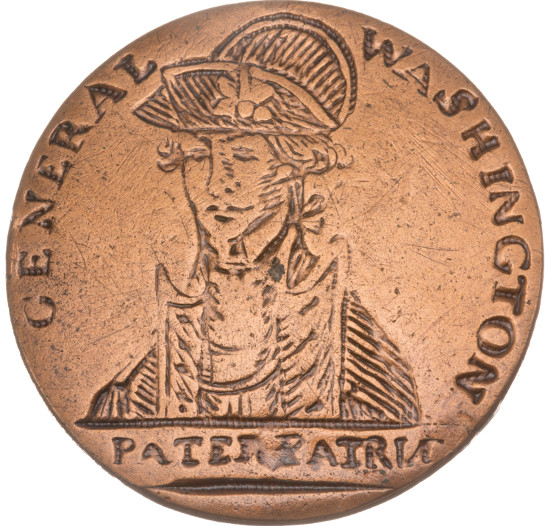 That Latin phrase means “Father of his Country”. While that term is commonly associated with Washington today, this appears to be the first use of this phrase.

Washington is shown wearing a revolutionary war era coat and hat, setting him as general of the Continental Army.

Only around six or seven specimens of this button are known.

This one is up for sale in Heritage Auctions’ February 24 sale of the David and Janice Frent collection of Us political memorabilia.

A lesser specimen, with a barely visible surface impression, sold for $7,500 at Heritage in 2015. That’s a figure that indicates the strength of demand for this rare token.

The present example is believed to be the finest known and is valued somewhere in excess of $25,000.

Meanwhile an iconic 1844 Henry Clay “Ship of State” campaign flag is offered with an identical opening bid of $25,000.

Below the ship is a short piece of doggerel that reads: "She will founder unless with true patriot zeal/ We get rid of the lubber who stands at the wheel.

“We’ll take a new pilot whose heart is true blue/ And such shall we find in our Harry the true."

Clay lost out to James K Polk in the election.

Heritage comments: “we cannot recall ever seeing an example of this wonderful design offered for sale.

“Arguably the most desirable Clay flag variety, and without question one of the top flags in the Frent Collection.”