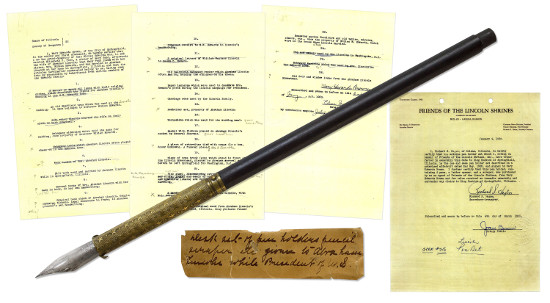 A pen gifted to Abraham Lincoln during the American Civil War (1861-1865) is due to cross the block at Nate D Sanders later this month.
The pen features a gold, star-studded barrel capped with a steel nib.

The stars appear to be a reference to the states of the Union. It’s likely this piece was a commission, although there’s no information as to who gifted it to Lincoln and where they might have got it from.

We do know that it passed through the hands of Lincoln’s grandniece Mary Edwards Brown, who worked as the custodian of the president’s Springfield estate.

She sold the piece to Richard Hagen, of Friends of the Lincoln Shrines, in 1925.

Lincoln’s Civil War years were the most important of his life.

Had he not led the Union to victory, the United States would look very different today.

Prices for the best specimens typically reach around $12,000, a sum that reflects the fact that this is one of the most widely read books on the planet.

Millions of people have drawn strength from its pages and curb their addictions.