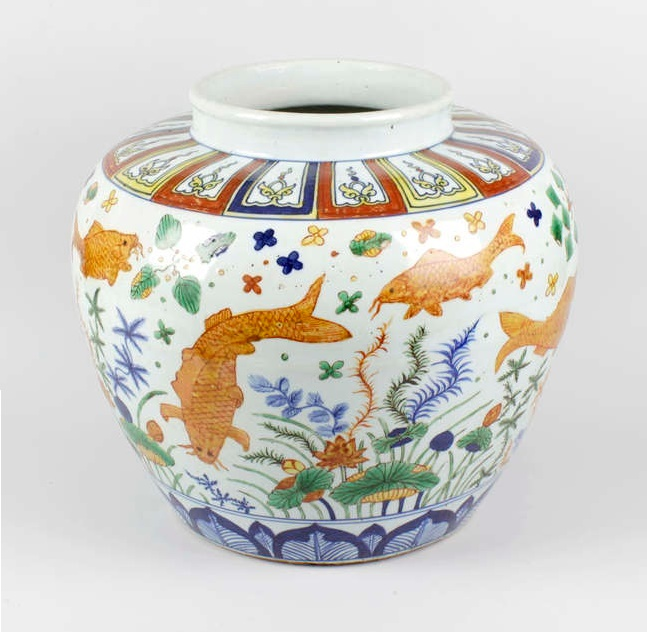 A ‘fake’ Chinese vase has sold for more than $1 million at auction in the U.K, after being initially valued at less than $1,500.
The Chinese porcelain wucai fish vase was auctioned at Fellows in Birmingham, having consigned to the sale via a Chinese client.

Standing 14" tall, the vase was painted and enamelled with large and small golden carp amongst rising lotus blossoms.

Upon the bottom of the vase was a mark which dated it to the 16th century Ming Dynasty, created during the reign of Jiajing Emperor who ruled from 1521 to 1567.

Initial research pointed to similar examples from which had previously fetched five or even six-figure sums at auction.

But when Fellows experts examined the vase, they felt the decoration was less sophisticated than those earlier examples.

However, they were stunned by the volume of interest in the vase and once the sale was in full swing, it became clear they had something special on their hands.

"Whilst we dealt with a number of condition enquiries before the sale, little could have prepared us for the result," said Fellows’ Senior Specialist Mark Huddleston.

"Bidding began at £1,000 and, with a handful of telephone bidders plus the usual hundreds online, predicting the final price became impossible.

"The most gratifying aspect is that a number of bidders were actually in the saleroom and had viewed it in person. One bidder even flew in from Japan and has a number of these in his collection."