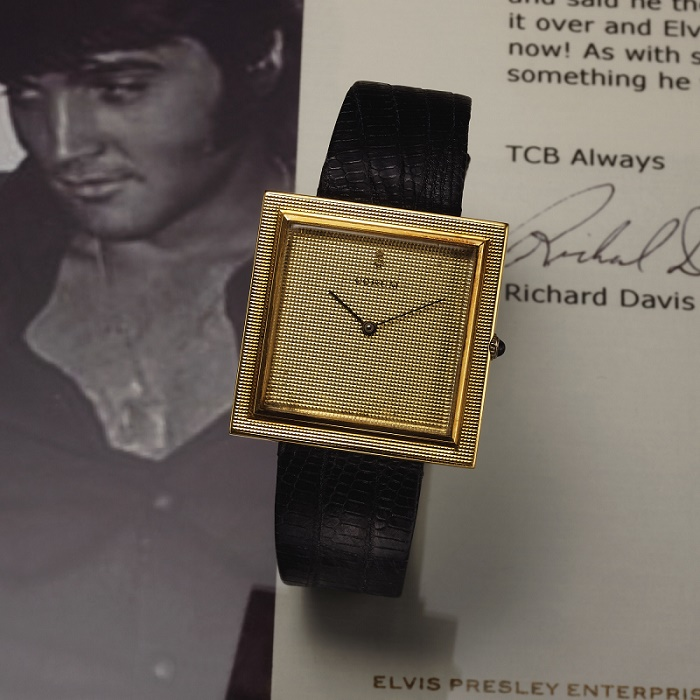 A gold wristwatch owned by Elvis Presley will be amongst the star lots of the upcoming Antiquorum sale in New York.
The sale on April 20 will include a selection of fine watches from some of the world’s greatest manufacturers, such as Patek Philippe, Richard Mille, Rolex, Girard Perregaux, along with a timepiece truly fit for The King.

The 18K yellow gold Corum ‘Buckingham’ watch was owned and worn by Elvis throughout the 1960s. It was gifted to his right-hand man Richard Davis, who worked as Presley’s valet, wardrobe assistant stand-in and personal body guard until 1971 and remained close friends with him until his death in 1977.

According to Davis, Presley casually mentioned one day that there was something wrong with the back of the watch, and handed it to him to inspect it. Davis turned it over to discover the new inscription “To Richard, From E.P.”, to which Elvis simply said “I guess it’s yours now.”

It was the perfect example of Presley’s generosity, just one of the hundreds of expensive gifts he gave to friends, employees and even concert-goers during his career. Offered along with eight colour photos of Elvis wearing the watch, and a letter from Davis recounting its provenance, the watch will be offered with an estimate of $10,000-$20,000.

The sale’s leading lot is a Patek Philippe Ref. 5013, described as "an outstanding example of horological achievement". The highly rare tonneau-shaped, minute-repeating astronomic wristwatch features a retrograde perpetual calendar, moon phases and leap year indication, and comes with an estimate of $350,000-$550,000.