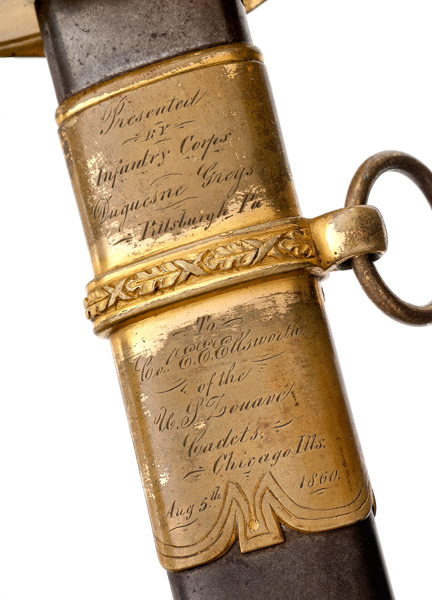 A presentation sword owned by Colonel Elmer E. Ellsworth, the first Union officer killed in the Civil War, will lead an American History sale at Cowan’s Auctions next week.
Ellsworth was a member of the 11th New York Regiment, and a close friend of Abraham Lincoln.

On May 24, 1861, Ellsworth led a small detachment of men from the New York Fire Zouaves to Alexandria, Virginia, to secure the town and remove a Confederate banner which had hung for weeks above the Marshall House hotel, where it was visible across the river from the White House.

After entering the hotel, he encountered a lone dishevelled man who claimed to be a resident and paid him no heed. Having returned from the roof with the Confederate banner, he was shot and killed by the man, who was in fact the hotel’s owner James W. Jackson, one of the most ardent of secessionists in Alexandria.

Jackson was immediately killed by Corporal Francis E. Brownell, who had accompanied Ellsworth on the mission, and who later won the Medal of Honour for his actions. News of Ellsworth’s murder shook the Union cause, and the cry "Remember Ellsworth!" became a patriotic slogan.

Following his death, Lincoln called Ellsworth "the greatest little man I ever met", and his body lay in state at the White House.

The sword is amongst a collection of 52 historic items, set to be offered as a single lot in the sale.

The collection also includes fragments of the very flag which cost Ellsworth his life, and the top of the flagpole from which it was originally suspended; a number of rare period photographs of Ellsworth; several newspaper articles and handbills recording his death; and other related documents, letters and books which relate Ellsworth’s notable life and career.