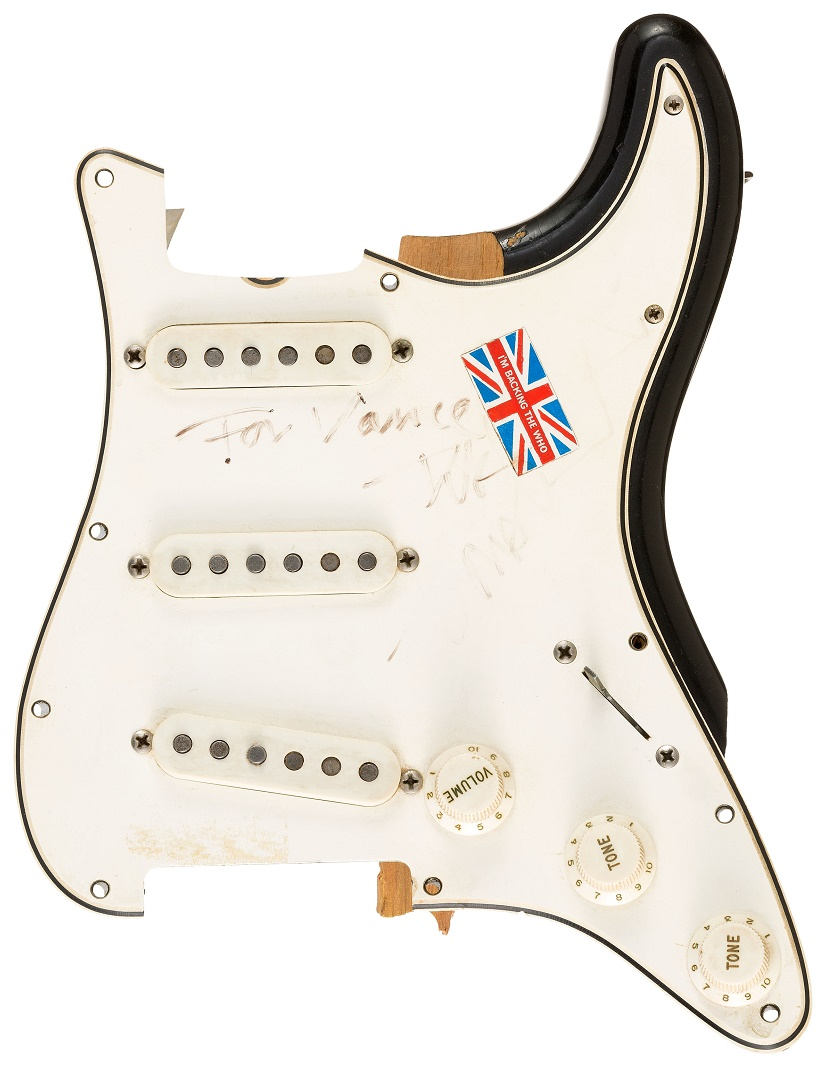 A personal collection of memorabilia from a concert by The Who, complete with a piece of Pete Townshend’s smashed guitar, is amongst the most notable lots in a sale at Heritage Auctions next month.

One summer day in 1968, Vance Rabius drove 50 miles from Higginsville, Missouri to Kansas City to score tickets for a Quicksilver Messenger Service show.

As he stood in line at Jenkins Music Store in downtown Kansas, he also saw that The Who were coming to town, and snagged tickets for that show as well – front row and centre, for him and his friends.

On August 22 he headed for the Municipal Auditorium Music Hall for a concert he would never forget.

The band was on fire that night, and Vance had the perfect seat to take photos of them in action.

As was traditional, Pete Townshend smashed his guitar to pieces during the riotous My Generation, and fragments of the Fender Strat flew into the crowd. Vance caught the main body, complete with pick guard, pickups and volume knobs, and his buddy Rick caught the broken bridge.

After the show, Vance hung around with a friend outside the auditorium and caught the band as they were leaving. He thanked Pete for his memento, and got the band’s autographs.

The next day he went back to Jenkins Music Store and grabbed their original poster for the show, to complete his collection of memorabilia from an incredible night.

Vance kept his collection, with his photographs and original ticket stubs, for decades. Through a strange quirk of fate and his second marriage, he later became friends with another 60s rocker – Arthur Brown, of the Crazy World of Arthur Brown, who had a habit of setting his hat alight and claiming to be the god of hellfire.

Brown and Townshend were old friends, so when Vance beat Brown in a game of pinball in 1988 he called in a favour – get me Pete’s signature on the smashed guitar. Brown obliged, and Vance’s guitar finally got the signature 20 years after it was destroyed.

Vance Rabius’ collection captures the essence of what makes music memorabilia important to so many people.

Those items recall a night that stuck with him for 47 years – the magic of seeing one of the world’s greatest bands with his best friends.

The collection will be offered as a single lot in the Heritage Auctions Entertainment and Music Memorabilia Auctions on June 24-25.

Featuring Pete Townshend’s guitar, the original store poster, Vance’s ticket stubs, 17 original photographs of the show and the band’s signatures, the collection is estimated at $50,000+: the perfect time capsule of one rocking night in Kansas.