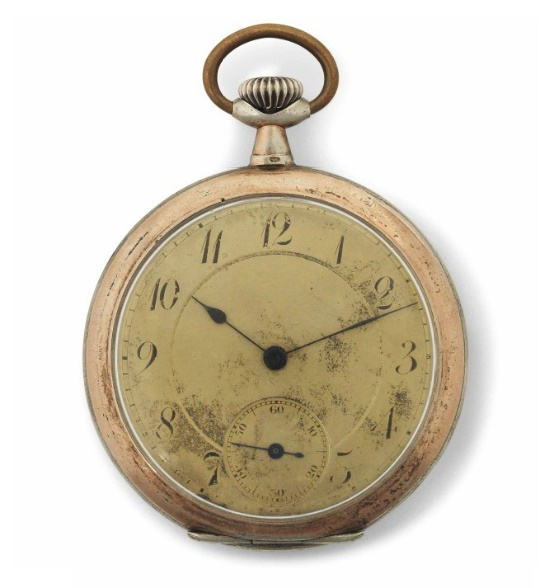 A pocket watch once owned by Albert Einstein has sold for more than 13 times its estimate at a Christie’s auction in London.
The simple silver Swiss open-face pocket watch was owned by Einstein during the earliest years of his career, following his graduation from Zürich Polytechnic in 1900.

He spent the next two years searching in vain for a teaching post, before settling for a job as a patent clerk in Bern, and began working on his thesis. By 1905 – his ‘anus mirabilis – he had written four groundbreaking papers and made scientific breakthroughs which changed the course of human history.

The watch, which had passed directly from Einstein to the present owner, was offered with an estimate of £15,000 – £20,000, but sold for a final price of £266,500 ($348,316).
Just two other watches owned by the physicist are known to exist. The first, a Longines pocket-watch dating from 1943, is currently owned by the History Museum in Berne; and the second, a gold Longines wristwatch presented to Einstein in 1931 during a luncheon in his honour in Los Angeles, sold at auction in New York in 2008 for $596,000.

First was a battered Levi leather jacket, worn by Einstein in the 1930s during his early days as a permanent U.S resident.

According to a colleague at Princeton University, where Einstein taught after fleeing Nazi Germany, he had chosen a hard-wearing jacket that would last for years in order to save time thinking about replacing it.

Einstein was photographed many times in the jacket, including on the cover of TIME Magazine, and it crossed the auction block – still smelling of his pipe smoke after 60 years – for a price of £110,500 ($144,424).

The second item, offered from the same private collection, was a set of building block used by Einstein as a child in the 1880s. His sister Maja recalled him playing with the blocks at the family’s home in Munich: "The games he played as a child were very characteristic of Albert’s capacities. These were mostly puzzles, fretsaw work, the erection of complicated structures with the well known Anker building blocks…"