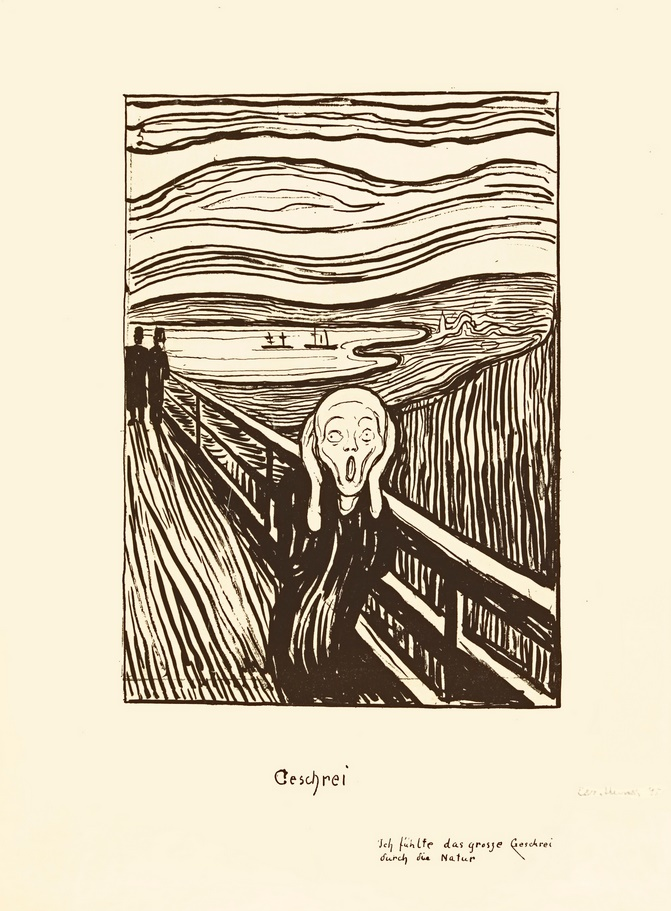 Sotheby’s is set to offer two "momentous" artworks by Edvard Munch across two sales in London this summer. The lithograph prints of his most famous work ‘The Scream’ and a sinister self-portrait have spent years hung together in the same Norwegian collection, and will both be offered at auction for the first time in their history.
The Scream is by far one of the most iconic images in art history, and Munch produced a small number of lithographic prints of his masterpiece in 1895, having created the original artwork in 1893 using tempera and crayon.

Around 45 prints were produced before the lithograph stone was resurfaced, and the example offered at Bonhams is one of the few to include Munch’s own quote, a phrase from his diary which inspired the work: "I felt the great scream throughout nature."

"Munch’s The Scream has transcended art history to reach a global consciousness and his lithograph of 1895 helped initiate the process of its mass proliferation," said James Mackie, Head of Sotheby’s Impressionist & Modern Art Department. "This exceptional impression has an impact no less powerful than Munch’s 1893 tempera and crayon version."

The second important work on offer is a lithograph print of Munch’s first self portrait, also executed in 1895.

Having suffered serious illness throughout both his childhood and adult life, Munch was painfully aware of his own mortality and the spectre of death hung constantly over his work. This striking image depicts the artist in Berlin at the age of 32, and includes a striking ‘memento mori’ in the form of a single skeleton arm.

The two rare and important lithographs were originally owned by Olaf Schou, a Norwegian industrialist who served as one of Munch’s closest friends and patrons throughout his career.

"The distinguished history of these masterpieces of printmaking makes their appearance on the market all the more exciting and significant," added Lucy Rosenburgh, Sotheby’s Prints Specialist. "We’re thrilled to be able to offer The Scream lithograph that was originally part of a collection which included one of the four unique Screams."