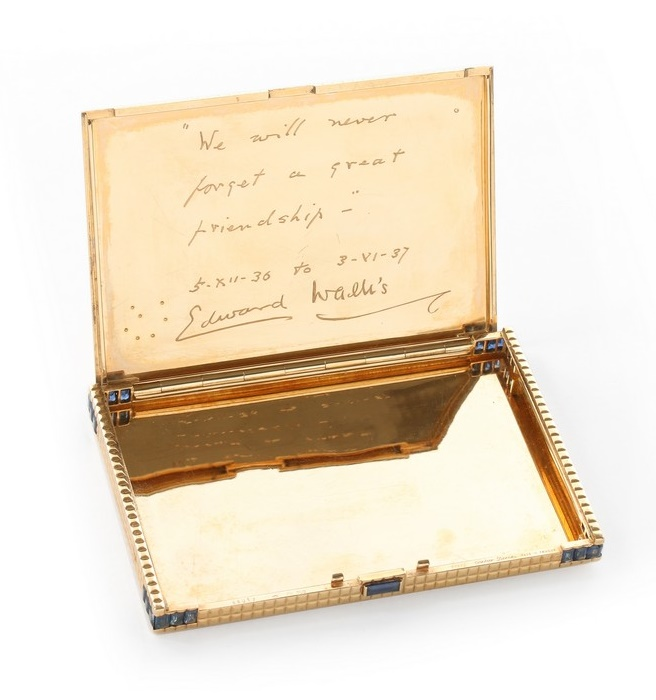 A treasure trove of historic memorabilia relating to Duke & Duchess of Windsor has been discovered in Canada.
The rare items were originally owned by Katherine and Herman Rogers, lifelong friends of the royal couple, and were recently discovered in a safe by Herman Roger’s grand-daughter following the death of her father.

The collection, which includes unseen private photographs, expensive gifts and even the signed guest book for their controversial wedding, will now be sold at Kerry Taylor Auctions.

The leading highlight of the collection is a solid gold Cartier cigarette case, given as a gift to Herman Rogers following the couple’s marriage ceremony, at which Rogers gave away the bride. Bearing the inscription "We will never forget a great friendship", and signed with the names Edward and Wallis, the case will be offered with an estimate of £20,000-£30,000 ($28,470-$42,700).

Another historic memento from one of the most famous marriages of the 20th century is the original guest book from the Château de Candé, the wedding venue loaned to them by French millionaire Charles Bedaux. Bearing the signatures of the Duke and Duchess on their wedding day on June 3, 1937, the guest book is valued at £3,000-£5,000 ($4,270-$7,117).

Also amongst the collection is an album of more than 200 photographs, documenting a holiday in the summer of 1936, during which Edward chartered the yacht ‘Nahlin’ and took Wallis, along with a small group of friends including the Rogers, on a tour of the Adriatic.

The holiday was widely covered by press around the world, but not in Britain, as the press maintained a self-imposed silence on the affairs of the newly-crowned King. The photographs show Edwards swimming and sunbathing bare-chested, which in itself caused scandal amongst ex-patriot Britons who had access to the story, along with images of Wallis wearing decidedly unstylish rubber bathing caps.

The Passion of Fashion sale takes place at Kerry Taylor Auctions in London on June 14.