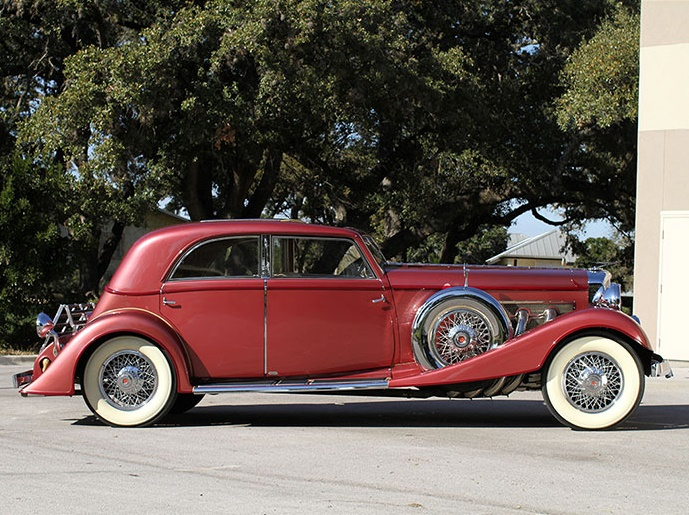 Auctions America has already announced a historic Duesenberg as a star highlights from its Auburn Fall weekend sale.
The event, which takes place at the historic Auburn Auction Park in Indiana in September, coincides with the annual Auburn Cord Duesenberg Festival – so it’s fitting that a stunning 1934 Duesenberg Model J Berline leads the first wave of consignments.

Known as ‘The Queen of Diamonds’, the car is one of the few surviving Duesenbergs with coachwork built outside the U.S. and was originally presented as a Town Car at the 1931 and 1932 Paris Salons, with a body by the renowned Parisian coachbuilder Franay.

However, when it failed to find a buyer Franay built new coachwork for the car, and transformed it into a far more stylish Berline, with a curved roofline, long skirted fenders, sliding sunroof and extraordinary detailing.

It was then snapped up by Mabel Boll, the daughter of a New York bartender who married up to became a renowned American socialite. Boll was known variously in the press as "Broadway’s most beautiful blonde" and the "$250,000-a-day bride", but her most common nickname was "The Queen of Diamonds", due to her fondness for wearing up to $400,000 worth of jewelry in public at any one time.

Boll married five times during her life, and had an obsession with aviation which led her to attempt to cross the Atlantic as a passenger several times (without success). She acquired the car in 1934 whilst living in Nice, France, but was hit by scandal soon after when her younger boyfriend, 27-year-old Georges Chariot, shot himself on her lawn.

Having since passed through notable collections on both sides of the Atlantic, the much-storied car will now be offered with an estimate of $750,000-$950,000.

"We’re looking forward to bringing not just another fantastic roster of cars to Auburn, but also to welcoming back collectors, enthusiasts, and the ACD community to the Classic Car Capital of America," said Megan Boyd, Car Specialist at Auctions America.

"As part of the Labor Day tradition, and more importantly, the Auburn tradition, we’re thrilled to offer another fabulous Duesenberg at our Fall sale. Lending European flair to an American icon, the Franay-bodied Duesenberg is not something collectors might expect to see here, but something we’re proud to bring back home to Auburn."

Auctions America is currently accepting consignments for the sale, which takes place on September 1-4.