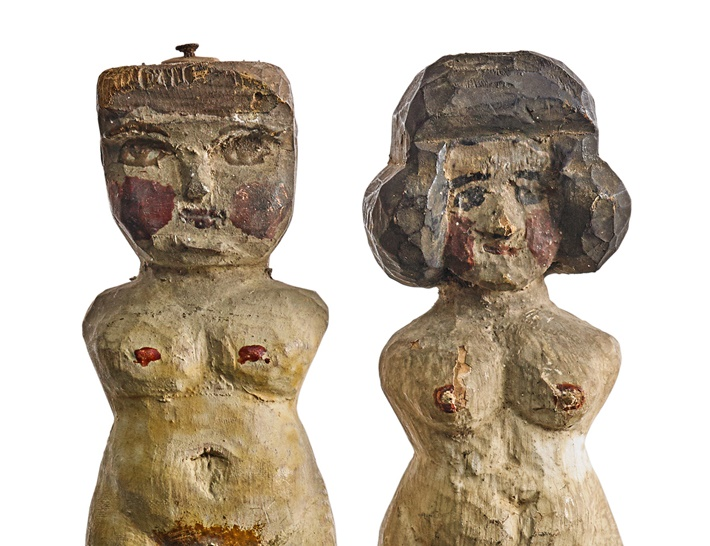 A pair of carved wooden figures with a truly creepy backstory are up for sale at Rago Auctions this month.
The mysterious figures will be offered as part of the company’s Curiouser & Curiouser auction in New Jersey on October 22.

In the late 1960s, a demolition crew working on the site of an old clay mine in Woodbridge, New Jersey made a spooky discovery.

Whilst clearing the site they came across an abandoned wooden shack containing more than 100 wooden figures, which closely resembled traditional fertility dolls.

The puzzling figures, which ranged in size from 3” to 9”, were all armless and anatomically correct.

Many were crudely painted, and most had holes in their heads plugged with cork stoppers, as if they had been designed to hold an unknown liquid.

Perhaps most disturbingly, each of the figures had been carved with a distinctive individual face, suggesting they represented specific people.

They became known as the Woodbridge Pit figures, and rumours surrounding their origin soon spread.

Some locals said they remembered an eerie church-like structure built up on the hill near the clay mine, complete with pews, although it didn’t belong to any specific religious group.

Others suggested the area had been home to a strange inbred family, descended from Hessian mercenaries who fought during the Revolutionary War.

Most agreed that, for as long as they could remember, the spot – known variously as the ‘Clay Pits’, the ‘Sand Banks’ or the ‘Dog Patch’ – had been considered creepy and off-limits.

In the early 1980s a New York gallerist specialising in American folk art acquired a box of the figures and sent an intern to Woodbridge to research their history.

According to legend, she returned to New York completely spooked, and asked never to be sent back there again.

Today the location of the mysterious shack is now buried beneath the foundations of the Woodbridge Center Mall, and the figures have become world famous examples of American folk art.

Most are now owned by an anonymous private collector, who has described them as having magical properties.

They are currently on long-term loan to the Museum of Everything, a travelling exhibition which celebrates outsider art in all its forms.

The two figures on offer at Rago are previously unknown examples, and were recently rediscovered in a home near Woodbridge. As a pair, they are expected to sell for $3,000 – $4,000.

To date, nobody knows who made the Woodbridge Pit figures, or their true purpose.

Some claim they were carved for use in bizarre rituals, whereas others say they were made as gifts or even sold as local souvenirs.